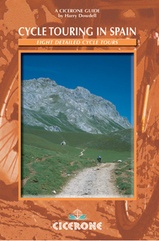 A guide to eight 1-2 week routes covering Pyrenees and Picos de Europa in the North, the Sierras of Demanda, Gredos and Guadarama in central Spain, and the Sierras of Nevada and Grazalama and the Serrania de Ronda in the South. Varying in difficulty, with options to shorten or lengthen stages or go off-road.

With an agreeable climate, Western Europe’s greatest wilderness areas, unmatched flora and fauna, and a history stretching back beyond civilisation, Spain, with its friendly people and readily available accommodation, makes an outstanding destination for the cycle tourist.

This guide contains the hard-won practical information needed by cyclists who wish to independently tour Spain, including when and where to go, how to get there, how to get around, accommodation, passports, visas and insurance, money and banks, bicycle considerations, living on the road and points of arrival.

In addition to the practical information eight routes are described in detail and illustrated with maps, profiles and accommodation lists. The routes vary in difficulty, being suitable for novice through to keen cyclists, and are described in five to twelve daily stages with options to shorten, extend or go off road as the cyclist wishes.

Introduction
Roads
Climate
Holidays and public holidays
A short history
Getting there
Getting around
Passports, visas, health care and insurance
Mobile phones
Money and banks
Staying there
About the bike
What to take
Eating and drinking en route
Coping with extreme weather
How to use this guide