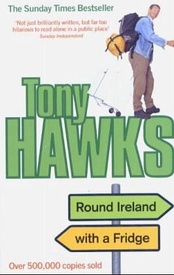 On his only prior visit to Ireland, songwriter/comic Tony Hawks had seen a man hitchhiking with a refrigerator. For years, he was wont to tell the tale during late-night drinking matches, and after one particularly heavy-duty night of partying, he awoke to find a bet scrawled pillow-side: a friend wagered 100 pounds that Hawks wouldn't travel Ireland for a month with a refrigerator at his side.
Out of this stupid premise, a ridiculously amusing book was born. Quickly discovered by the Irish media, the thumbing Englishman finds that he and his box fridge are elevated to celebrity status, and there's no dearth of rides, places to stay or goofy people to meet, from kings to spoons players to locals who take his fridge surfing. As insightful about the strange inner workings of Hawk's mind as it is about charming peculiarities of Irishmen--it's doubtful that Hawks would have been similarly embraced by Germans, Italians, or the French--Round Ireland with a Fridge is an entirely silly, heart-warming tale told in a rollicking funny and refreshing style.

I'm not sure how many times I've read this book over, but it never fails to make me laugh. I think in part it is because it supports my own experiences of travelling in Ireland - though sans refrigerator - and brings back a lot of warm memories... though not of the weather; like Tony Hawks, my first experience of Irish weather was opening my curtains to sheeting rain! Still, you don't go to Ireland for the weather, you go for the Guinness and the craic (not to mention the scenery, the music, the people, the change of pace...). It's been too long, it makes me want to go back, but if I can't get there, this is the next best thing for me. Incidentaly, one tip for travellers that he (not surprisingly) fails to mention is that if you visit a pub in Ireland, only order pints (or more if possible) - halves are charged at almost the same price in a lot of places. It just doesn't seem to be done! It's an inspiring read - it proves that with sufficient bloody-mindedness, and the backing of a whole country (!), anything is possible. I found the book a refreshingly honest and entertaining read. Tony Hawks's style is naturalistic and at times unpolished, but I don't think that detracts in any way. In fact, it reminds you that basically he's a pretty ordinary bloke on a pretty ridiculous journey with a somewhat misplaced piece of kitchen equipment - and that's the story he's trying to tell, after all.