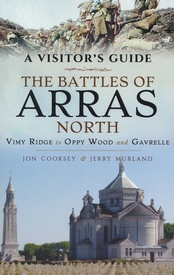 The First World War battlefields to the north of Arras - including Vimy Ridge - are among the most famous and most visited sites on the Western Front, rivalled only by those around Ypres and the Somme, and this clearly written, highly illustrated guide is the ideal introduction to them. Visitors can trace for themselves the course of each battle across the modern landscape and gain a fascinating insight into the nature of the fighting in the area - and the wider conflict across the Western Front - throughout the war. The book covers the key battles fought in the northern sector of the Arras front, including the 1917 Battle of Vimy Ridge and battles at Villers au Bois, Oppy Wood and Gavrelle.

Expert guides Jon Cooksey and Jerry Murland have devised a series of routes that can be walked, biked or driven, explaining the fighting that occurred at each place in vivid detail. They record what happened, where it happened and why, and point out the sights that remain for the visitor to see. Their guidebook is essential reading for visitors who wish to enhance their understanding of the war on the Western Front. AUTHORS: Jon Cooksey is a leading military historian who takes a special interest in the history of the world wars.