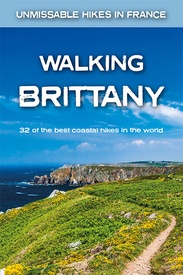 Wild coastline: endless towering cliffs, remote rocky headlands, almost forgotten islands and stunning beaches which would not be out of place on a Caribbean island.
Explore a region packed with beauty and historical interest: megalithic sites, World War 2 fortifications, ancient villages and much more.
Real IGN Maps inside: 1:25,000.
Also includes:
▶ Numbered waypoints linking the Real Maps to our clear descriptions
▶ Graded routes to suit all abilities
▶ Everything the hiker needs to know: route descriptions,  difficulty, weather, how to get there, and more
▶ Information on Wildlife and Plants
▶ Carnac and other Megalithic sites
▶ Section on World War 2 and the 'Atlantic Wall'
France is a large country with a huge and varied coastline. This coastline is very wild and very beautiful but rarely is it both wilder and more beautiful than in Brittany. This stunning part of the world's most visited country has around 3,000 km of sea frontage so you could spend a lifetime here walking along the tops of the spectacular and seemingly endless cliffs; around the remote rocky headlands and peninsulas jutting out into the Atlantic; and across innumerable white sand beaches which would not be out of place on a Caribbean island.
With so much coast on offer, it is understandable that Brittany, and its people, have a strong connection with the sea: evidenced by the countless yachts, fishing boats and other watercraft which are moored in the ports, harbours, bays and estuaries.
In fact, there are many who would argue, with much justification, that Brittany has the finest stretch of coastline in Europe. Of course, that is a subjective matter but it is indisputable that the coast of Brittany is vast. So vast that it is not possible to see everything on a single trip. So vast, in fact, that it is difficult to know where to start and that is where this guidebook comes in. To make planning easy for you, we have included here only the very finest of the thousands of possible walks on Brittany's coast. There are no 'fillers': only the most spectacular routes made the cut. We have 'sifted the wheat from the chaff' so that you do not have to.