Walking the Trails of History 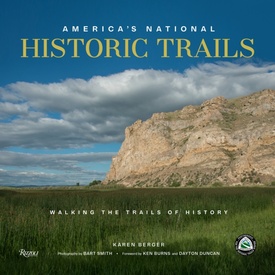 An inspirational bucket list for hikers, history buffs, armchair travelers, and all those who wish to walk in the hallowed footsteps of American history.

From the battlefields of the American Revolution to the trails blazed by the pioneers, lands explored by Lewis and Clark and covered by the Pony Express, to the civil-rights marches of Selma and Montgomery, this is the official book of the country's 19 National Historic Trails. These trails range from 54 miles to more than 5,000 and feature historic and interpretive sites to be explored on foot and sometimes by paddle, sail, bicycle, horse, or by car on backcountry roads. Totaling 37,000 miles through 41 states, our entire national experience comes to life on these trails--from Native American history to the settlement of the colonies, westward expansion, and civil rights--and they are beautifully depicted in this large-format volume.