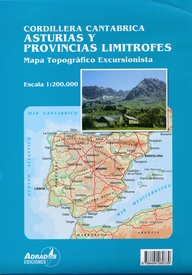 Cordillera Cantabrica on a detailed road map from the Oviedo based Adrados Ediciones, presenting this mountainous region with contours at 100m intervals, altitude coluring, relief shading and UTM coordinates.

Since the publishers specialize in detailed hiking maps, including the best coverage of the Picos de Europa, the map includes an exceptionally large number of names of peaks, passes, etc. Symbols highlight best rock and ice climbing areas, huts and refuges, campsites, mountain rescue posts and information centres. Along the coast numerous beaches are named.

Road network includes small country roads and tracks. Local railway lines are shown, although not very easy to see on the base map filled with so much information. The map has a 10km UTM grid. Map legend is in Spanish only.

On the reverse is a panorama drawing of the area, looking south from the coast with León and Pontevedra in the background. Numerous towns and villages, as well as peaks of the Cordillera Cantabrica are named. An administrative map of the area shows its division into communes and highlights its many protected areas, accompanied by an index listing, where appropriate, each commune with its highest peak.

Also included is a very extensive list of all the peaks in the Cordillera Cantabrica over 1200m. Accompanying notes are in Spanish only.

Important - please note: All place names are in the local dialect, so Xixon for Gijón, Uvieu for Oviedo, etc. The map is printed on glossy paper and may not withstand repeated folding and unfolding whilst traveling by car, but it is ideal for finding out more about this fascinating region outside its main attraction, the Picos de Europa.