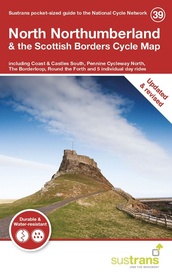 North Northumberland & the Scottish Borders Cycle Map | Sustrans Map 39
Sustrans North Northumberland and the Scottish Borders cycle map shows the National Cycle Network and local routes in this area. It covers north Northumberland and the Scottish Borders region in the north east of England and south Scotland, including Berwick-upon-Tweed, Melrose, Haddington, Dunbar and Eyemouth.
The National Cycle Network and cycle tracks in Northumberland and the Scottish borders
Heather-clad hills, forests, wide-open spaces and stunning coastal vistas abound in North Northumberland and the Scottish Borders. The region also boasts one of Scotland’s leading cycling destinations with quiet roads and a variety of local signed routes for all ages and abilities, many of which are directly connected to or share sections with the National Cycle Network. The Borderloop is the most challenging, a 250-mile circular journey through the Tweed Valley and up into the Cheviot and Tweedsmuir Hills. The Borderloop4 are four new shorter loops within the Borderloop and link the historic towns of Peebles, Hawick, Melrose and Kelso. See Cycle Scottish Borders website for more information.
On the English side of the border, National Route 1 hugs the coast between Alnmouth and Berwick-upon-Tweed.  This stretch of the long-distance Coast and Castles South cycle route really lives up to its name as it goes through Northumberland Coast AONB past unspoilt sandy beaches and mighty fortresses, such as Bamburgh Castle, built upon jagged outcrops overlooking the North Sea.
At the historic border town of Berwick-upon-Tweed, National Route 1 heads inland following the River Tweed towards Melrose and crosses the Moorfoot Hills to Edinburgh. The Tweed Valley provides flat open riding in the agricultural plains of the east before turning to rolling hills and moorlands in the west. The new Borders Railway makes the border towns of Galashiels and Tweedbank accessible from Edinburgh in under an hour.
An alternative is provided by National Route 76, which heads north along the coast, past the attractive fishing towns of Eyemouth and Dunbar. The latter is the birthplace of John Muir, the author and environmentalist who created the national park system in the USA. Along the way, St Abbs Head National Nature Reserve provides an excellent spot for watching a wide variety of seabirds.
This pocket-sized map shows clearly mapped on-road and traffic-free paths, easy to read contours, and detailed inset maps for the major towns and cities as well as recommended linking routes connecting the NCN to quiet roads. The map also features 5 day rides with directions and a description of the area, highlighting key cycle routes, local history and places of interest.
Please see our interactive map for UK coverage of our pocket cycle map series.
Major cycle routes covered by this map:
National Route 1 (North Sea Cycle Route) between Alnmouth and Tweedbank via Holy Island, Berwick-upon-Tweed and Kelso. This makes up part of the Coast and Castles South long-distance ride.
National Route 76 continues along the coast from Berwick-upon-Tweed to Haddington. This route is part of the North Sea Cycle Route.
National Route 68 between Alnham and Berwicick-upon-Tweed. Berwick marks the finish of the long-distance Pennine Cycleway.
Route 196 from Haddington to Ormiston
The 4 Abbeys cycle route and the eastern half of The Borderloop cycle route are show on this map.