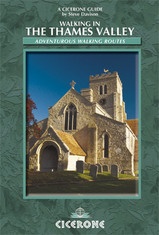 Walking in the Thames Valley offers 25 challenging circular walks around the River Thames and River Kennet in the south of England, taking in the Southern Chilterns, the Berkshire and North Hampshire Downs, Southern Oxfordshire and the eastern edge of Wiltshire. All routes are within easy reach of Reading, Newbury, Abingdon and London.

While some walks visit Iron Age hill forts, others pass more modern features such as Wilton Windmill and the Kennet and Avon Canal. Some follow sections of the Ridgeway, while others meander along the banks of the Thames. What they all have in common is that they take the keen rambler to some of the best parts of the Thames Valley – a patchwork of open chalk grassland, broadleaved woodland and farmland and home to two Areas of Outstanding Natural Beauty.

• walks from 10 to 18 miles, including one 2-day route
• shorter, less strenuous alternatives for many of the walks
• detailed route descriptions with information on local points of interest, OS mapping and vibrant colour photographs

This guidebook offers a collection of 25 adventurous circular walks in the Thames Valley, covering the Southern Chilterns, Berkshire, Lambourn and North Hampshire Downs and Southern Oxfordshire, all within easy reach of places such as Reading, Swindon, Newbury, Abingdon and surrounding towns.

All the walks – which vary in length from 10 to 18 miles (16 to 29km) and include a two-day (26-mile/42km) weekend walk over the Lambourn Downs – have a detailed route description that includes information on points of interest along the way, and are accompanied by a map based on Ordnance Survey Landranger 1:50,000 series maps. Many of the routes also have shorter (around 7–10-mile/11–16km) options, for those times when you want a less strenuous day out.

Some of the walks visit the ancient sites of Iron Age hillforts while others pass more modern features such as Wilton Windmill and the Kennet and Avon Canal. Many pass through picturesque villages with cosy pubs, thatched cottages and fascinating old churches. Some follow sections of the Ridgeway National Trail, which links some of the oldest ‘green’ roads in Britain, while others meander gently along the banks of the River Thames following the Thames Path. All the walks have one thing in common: they introduce the adventurous rambler to some of the best parts of the region.

The countryside encountered on these walks forms a patchwork of open chalk grassland, broadleaved woodland and farmland. Below the downs, chalk streams flow from the springline and support a diversity of plant and animal life; some of these streams, known as winterbournes, are seasonal and only appear during the wetter winter months. The richly wooded character of the Chiltern Hills distinguishes them from other, commonly more open, chalk landscapes such as the Lambourn Downs. Many of these woodlands are termed as ancient woodlands, defined as being continuously wooded since at least 1600. These areas tend to support a greater number of species and their character often closely reflects the underlying soil conditions, producing a wide range of woodland types and wildlife habitats.

You should have plenty of opportunities for catching glimpses of local wildlife, from foxes to roe and fallow deer or the much smaller muntjac; you may even be lucky enough to catch a glimpse of the elusive badger as dusk approaches. Along the riverbanks you may see herons patiently waiting for a fish to swim past, or the vivid turquoise-blue and orange flash of a kingfisher as it darts along the river, while the ever-present ducks, coots, moorhens and mute swans will keep you company.

As you wander through the ancient broadleaved beech and oak woodlands you may hear the drumming knock of the great spotted woodpecker declaring its territory, or the raucous call of a jay. Oak woods offer the more diverse wildlife habitat. Beech woods – a celebrated feature of the Chilterns – have a much denser canopy that greatly reduces the light reaching the ground, though even here, in late spring, the forest floor is carpeted with vivid bluebells.

The open chalk grasslands support rare butterflies, plants including gentians and orchids and traditional farmland birds such as the colourful pheasant; high above you’ll often hear the skylark singing, or see the majestic silhouette of a buzzard soaring overhead. One of the success stories of the area is the reintroduction of the impressive red kite, and you’d be unlucky not to see one while walking in the Chilterns. These birds of prey, with distinctive forked tail, chestnut-red plumage and high-pitched whistling calls – ‘weeoo-wee-wee-wee’ – were driven to extinction by the end of the 19th century. However, in the early 1990s the RSPB and English Nature reintroduced some birds; their numbers have increased, and there are now over 200 pairs of breeding birds in the region.