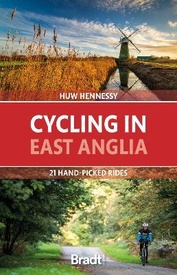 Following the same format as Bradt's Cycling in Cornwall & the Isles of Scilly, this new cycling guide to East Anglia offers 21 routes for beginners and 'leisure cyclists', covering Norfolk, Suffolk and Cambridgeshire. Each ride includes comprehensive directions, as well as background features on local history, wildlife and culture. All are linked to OS Explorer maps and relevant National Cycle Network routes (NCN), and include National Grid Reference (NGR) coordinates.

In addition, each route has been mapped on route planning and navigation app komoot, where readers can find detailed route insights including an elevation profile and waytype and surface information. Using the komoot app for iOS or Android, readers can also use their smartphones to navigate each route.East Anglia, the snail-like bulge protruding off the back of the United Kingdom's east coast, is a vast flatland of broads, fens and marshes, stretched out under a wide sky.

Despite its proximity to London and the Midlands, and its continental ferry links, it is one of the quietest regions in the country. The ancient kingdom of the Angles is also its oldest inhabited region, from Paleolithic times to subsequent Viking and Roman invasions; its wetlands tamed with canals and windmills and built over with hundreds of medieval churches. With its level, traffic-free lanes, and network of dedicated cycle routes, this is also an ideal destination for exploring by bike.

Most of the rides are around 30 kilometres long, ideal for a half-day outing. 19 out of the 21 routes are loop circuits, making travel hassle-free, and several are adjacent so can be linked, for more energetic cyclists wanting a longer challenge. Places covered include Sandringham, Wells, Holkham, Norwich, the Norfolk Broads, Bungay, Thetford Forest, Ixworth, Diss, Southwold, Walberswick, Orford, Sutton Hoo, Ely, Newmarket and Graffham Water.Its long, sandy beaches and traditional seaside resorts have made East Anglia one of the UK's favourite holiday destinations. From rambles around sleepy villages to adrenalin-rush mountain bike circuits, this guide will be packed with inspiration for cyclists of all ages and energy levels.