Serbia, Romania, Bulgaria. From Belgrade to the Black Sea 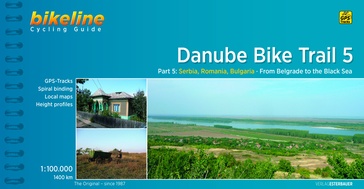 The fifth part of the Danube Bike Trail begins in Belgrade and ends in Romania on the Black Sea.
With a total length of 2,845 kilometres, the Danube is Europe’s second longest river (after the Volga with 3,534 kilometres), and the only one on which kilometres are counted in reverse direction, starting with kilometer zero at the mouth and ending upstream at the source.
The total length of Part 5 of the Danube Bicycle Trail is about 1,400 kilometres. This does not include various side trips and alternative routes. The Danube Bike Trail is part of the Eurovelo-Route 6 and to a great extent identical.
This last part of the Danube Bike Trail mostly follows paved main roads and secondary roads, which you share with a variety of other traffic. It is not unusual in some parts of Bulgaria and Romania that you encounter more horse or mule carts, pedestrians or roaming sheep or geese than motorized traffic. In and around the larger cities, however, you can expect heavy traffic and you should take particular care around trucks, which do not always give sufficient respect to cyclists. Between the urban centers you will encounter many long stretches on minor country roads with only little traffic.
There are several stretches along unpaved dike roads or rural, earthern roads which can become difficult to negotiate during or just after wet weather. The main route follows dike roads of varying quality just after Belgrade, where alternative routes along paved roads are described. In Bulgaria there is one section in particular which has proven problematic for riders and one should consider using the main road (refer to map b27 and the tip on page 88). Other unpaved sections, such as that found on map C9 are less problematic or can easily be avoided using a given alternative route.
Major climbs must be overcome through the Danube Gorge and the route through Bulgaria, as well as the first part of both of the last sections. The numerous smaller climbs, which occur particularly in the hilly regions along the Bulgarian route and the last two sections in Romania, should also not be underestimated. A good alternative to the hilly Bulgarian route is the Romanian route between Vidin and Calarasi. Compare the altitude profiles at the beginning of each section as well as the detail maps to get an idea of where the greatest climbs are to be expected.
The route is completely signposted in Serbia, while in Bulgaria you will encounter signs only between Vidin and Nikopol. The signs bear the inscription "Dunavska ruta" and "Donauradweg" in Serbia and "Danube velo route" in Bulgaria. In both countries the signs also carry the "Eurovelo-Route 6" logo. In Romania there are no signs on any part of the route.