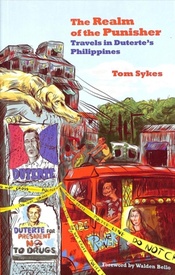 In June 2016, Rodrigo Duterte won the Philippine presidential election by a landslide. Infamous for his bombastic temper and un-PC wisecracks, he is waging a brutal drug war that has killed more than 12,000 people so far.
Over the last nine years, British writer Tom Sykes has travelled extensively in the Philippines in order to understand the Duterte phenomenon, interviewing friends and enemies of ‘The Punisher’ – as he is known – in politics, the media, the arts and civil society. Sykes witnesses anti-government demonstrations in the capital Manila and visits the provincial city of Davao, where Duterte began his crusade against crime using police and vigilante death squads. By delving into Duterte’s troubled childhood of violent rebellion, Sykes discovers what motivates the man today in his pursuit of a merciless ‘war on the poor’ – as Amnesty has described it – that has no end in sight.
The Realm of the Punisher also examines oppressed and marginalized groups in the modern Philippines through encounters with a transgender rights campaigner, an 86-year-old former sex slave to the Japanese in the Second World War, a public artist who must work while under attack from Maoist rebels, and slum-dwellers resisting violent eviction by a real estate company.
The past is never far away from these present-day problems and Sykes’ travels to festivals, cemeteries, war memorials and a tomb housing an embalmed corpse reveal the ways in which key figures in Philippine history – from José Rizal to Ferdinand Marcos – have influenced current affairs.
Funny, tragic, enlightening and uncompromising – and infused with the author’s strong sense of social justice – The Realm of the Punisher is the first major travel book by a Westerner to explore Duterte’s Philippines.
Tom Sykes has written about the culture and politics of the Philippines and other countries for The Telegraph, New Statesman, Private Eye, The Scotsman and many other publications. He is Senior Lecturer in Creative Writing at the University of Portsmouth, UK.