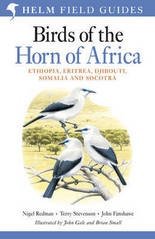 The Horn of Africa has the highest endemism of any region in Africa, and around 70 species are found nowhere else in the world. Many of these are confined to the isolated highlands of Ethiopia and Eritrea, but a large number of larks specialise in the arid parts of Somalia and adjoining eastern Ethiopia, whilst the island of Socotra has its own suite of endemic species. The region is also an important migration route and wintering site for many Palearctic birds.
In summary, the changes to the second edition are:
- 7 whole plates have been replaced (six estrildid plates and the plate of the large white-headed gulls plate) plus more than 20 other new or replaced images
- minor amendments made to dozens of other images
- about 200 maps have had minor tweaks (mainly ranges in Somaliland, which are now better known)
- all the maps have been improved with regard to colours and shading
- many text corrections in light of new information (mainly distributional, but also ID and some taxonomic changes)
- three new vagrants have been added
- simple checklist has been replaced by an annotated distributional checklist (by country)
- comparison table for large white-headed gulls added as an appendix