A year alone with the birds 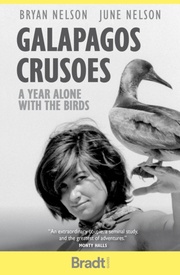 A new, updated version of the celebrated 1968 title, Galapagos: Islands of Birds, by the renowned late ornithologist Bryan Nelson, with additional, previously unpublished reminiscences and lively and irreverent memories from his wife June. This timely reissue breathes new life into a classic work of natural history that will appeal to bird-lovers and Galapagos-lovers alike. It is as memorable for its groundbreaking descriptions of Galapagos wildlife as for June's naked appearance in the News of the World accompanied by a quote from the Duke of Edinburgh.In 1964 the late Bryan Nelson, a zoologist, and his wife June spent a year living on two uninhabited, waterless Galapagos islands studying the three species of booby ('we couldn't resist also studying the great frigatebird and waved albatross, too' says June).

Bryan's book, Galapagos: Islands of Birds was published in 1968 and, although by necessity a scientific study, his light touch and the extraordinary hardships and delights of living in total isolation with no means of rescue should things go wrong, make it an exceptionally good read. Now, nearly 60 years later, June Nelson has extracted the story of that extraordinary year and complemented it with her own recollections. The couple's research and findings remain relevant and interesting, so plenty of wildlife descriptions are retained, but it is the mischievous mocking birds and friendly sea lions which will captivate the reader as much as the famous blue-footed boobies and waved albatrosses. At the end of their stay on Hood, when their clothes were literally in tatters and they went barefoot, they had news of the imminent visit of The Duke of Edinburgh and the Royal Yacht Britannia. June's description of this visit and their lunch on board with Prince Philip, make a surreal ending to a year of deteriorating food: 'Now our flour had around 50 maggots or beetles per pound... Dried beans would have three or four beetles per bean... In spaghetti a black shadow meant beetle, a grey one maggot. It took a long time, breaking out each shadow, to make a meal.'