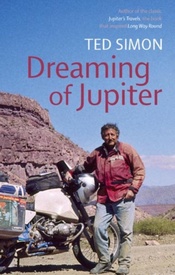 Ted Simon is the author of the classic travel book JUPITER'S TRAVELS. It documents his four-year journey round the world by motorbike, travelling through Europe, Africa, South and North America, and Asia. A number one bestseller in the late 1970s, it is still regarded as one of the greatest motorcycle books - indeed, one of the greatest travel books - ever written. In 2001, at the age of 69, Ted Simon decided to retrace his journey, and DREAMING OF JUPITER is the result. It took him two and a half years - during which time he revisited all the countries he had travelled through in the 1970s. He found much had changed, and he reflects upon the increased poverty, political upheavals, environmental issues and indeed the changes in himself. But ultimately, DREAMING OF JUPITER is a hugely inspiring read with a positive message at its heart - that even at the age of 70 you can still set off on an adventure, and be surprised and excited by what life throws at you along the way.