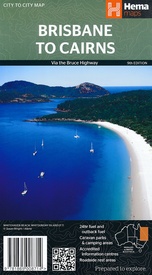 An easy-to-follow map that shows both the coastal and inland routes from Brisbane to Cairns. Roadside rest areas, intermediate distances, and a quick-find distance chart are also shown. The map shows all the popular tourist destinations along the Queensland coast.

Routes between Brisbane with Cairns in a series of touring maps connecting Australia’s main centres of population along some of the most spectacular routes such as the Great Ocean Road or the Savannah Way. The maps highlight 24-hour fuel supplies, roadside rest areas, camping facilities, places of interest, etc., and include distance charts and, in some titles, city maps. Road network indicates unsurfaced roads and tracks. The maps also show railway lines. There is no topographical information beyond names of mountain ranges and selected peaks, plus rivers and lakes, but national and state parks, conservation areas and reserves, and aboriginal lands are all highlighted. The maps have a grid showing latitude and longitude at intervals of 1º or 2º.

In this title: the coast Queensland, from Ballina (NSW) and the Gold Coast south of Brisbane, along the Great Barrier Reef to Cairns and Cooktown, showing the Bruce Highway along the coast and the alternative routes further inland. The map extends westwards to Longreach to include the Capricorn Highway along the Tropic of Capricorn. A special inset shows 14 routes across the northern part of Queensland (not all of them covered by this map) from the Great Tropical Drive from Cairns to Cooktown along the coast and back via the interior, to shorter routes under 300km.

Also included are an enlargement showing through roads across the suburbs and environs of Brisbane, a street plan of central Cairns, tables showing facilities in the national parks, distances and driving times along the Bruce Highway, a distance table for other road connections, a list of contact details of information centres, and general notes on the area. Latitude/longitude grid is at 2º intervals.