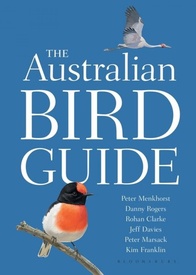 Australia's avifauna is large, diverse and spectacular, reflecting the continent's impressive range of habitats and evolutionary history. With specially commissioned paintings of over 900 species, The Australian Bird Guide is the most comprehensive field guide to Australian birds ever seen.
The Australian Bird Guide features around 4700 colour illustrations, with particular emphasis on providing the fine detail required to identify difficult groups and distinctive plumages. Comprehensive species accounts have been written by a dedicated team of ornithologists to ensure identification details, distribution and status are current and accurate.
The Australian Bird Guide sets a new standard in field guides, providing an indispensable reference for all birders and naturalists looking to explore Australia's magnificent and unique birdlife.
Contents
Foreword
Alphabetical quick reference to bird groups
Acknowledgements
Constructing the guide
Identifying birds
Birding in Australia
A guide for birders to the evolution and classification of Australian birds
Key to abbreviations and symbols
Species accounts
Checklist of species
Glossary
Index
Long awaited, now gestated. Now the best of the 5 main guides in Australia, and includes all the sundry overseas territories with the many vagrants subsumed in the main text. This is not too intrusive and makes for handy comparisons, though I still feel they might have been better placed as a separate appendix, as for most visitors and residents these are not the priority.
Plates are of a very good standard by the team of 3 artists, as always one or two odd ones as with the very peculiarly shaped pale Yellow Robin, but overall excellent. The text is highly informative and picks out the salient characters very well, as you would expect from such experienced field birders. The maps are a very small, it works for monotypic species and these with a couple of subspecies, but becomes very hard to discern with multiple taxa, but the book is already large and heavy. It is odd how many of the Oz guides have weird size formats and this one follows Pizzey & Knight in being too big for the pocket.
Taxonomy follows IOC 5.2, and one oddity was the omission of Hornbill Friarbird, still languishing in Helmeted Friarbird here and annoying for those of us in North Queensland, but this is the first Aussie guide to show newly split species like Naretha Bluebonnet, Western Whistler, Gilbert’s Honeyeater and Copperback Quail-thrush. Subspecies are usually well-illustrated and potential/likely splits as with Grey Whistler, Little Shrike-thrush, the 3 shrike-tits and Striated Grasswren are well covered. One oddity is that overall length is not given, you get wingspan instead, a curious decision and one that will take some mental adjustments; you also get bill length as well.
Highly recommended and now the default guide for Australia.