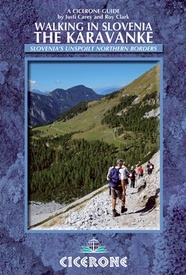 This guidebook offers 23 walking routes set across the magnificent 120km-long Karavanke mountain range, which forms a natural border between Austria and Slovenia. Commonly known as 'the way the Alps used to be', as it is yet to experience the extent of commercial development known by the Western Alps, it is one of the longest ranges in Western Europe but it remains genuinely unspoilt and relatively unvisited by English-speaking hillwalkers. The guide's walks begin in pretty towns and villages, and most of them access the peaks from the relatively more gentle Slovenian side of the range, where forest-clad slopes lead to grassy summits where spectacular views can be enjoyed. Arranged by peak from west to east along the range, most of the summits can be reached by waymarked paths and trails. The guide gives all the practical details you need on transport, accessing the routes, accommodation and available facilities, as well as insight into the historical sites passed on the way. The Karavanke offers a wealth of superb walking opportunities for walkers of all abilities, and this is an invaluable companion to discovering the range for yourself.

The magnificent 120km-long Karavanke mountain range forms a natural border between Slovenia and Austria. It is one of the longest mountain ranges in Western Europe, yet it remains relatively unvisited and unknown among English-speaking hillwalkers. Visitors tend to rush to the much better known Julian Alps, leaving these gems of mountains untouched, so they are yet to experience the extent of the commercial development known by the Western Alps.
The range divides naturally into two sections: the Western Karavanke, as far as the Košuta ridge, is more or less a single unbroken ridge, while the Eastern Karavanke are split into several massifs. The typical pattern all along the range is of precipitous rocky faces to the northern, Austrian side, while to the southern, Slovene side there are steep grassy slopes and terraces.
All the walks are graded from 1 to 3, and though not an official system this will help assess each route’s suitability to your own ability and taste. It should be noted however, that even the easiest grade (1) may be a long and tiring excursion, despite not being excessively steep or technical, so previous mountain experience is recommended. The highest graded routes are particularly strenuous, tackling high and exposed sections that require the aid of fixed steel cables and pegs.
Arranged in the book by peak from west to east along the range, the routes feature major highlights including Stol (at 2236m the highest in the range and one that forms a stunning backdrop to the beautiful Lake Bled), the majestic Košuta ridge and Golica – a mountain that displays a fine carpet of white daffodils in May.
• detailed description of 23 walking routes, covering the entire range from west to east
• insight into the history of the area
• practical details on transport, accessing the routes, accommodation and available facilities
Seasons
Main walking season late June to early September, safely extended to include May for the wonderful bursts of spring flowers and up to mid-October for the amazing autumn colours
Centres
Kranjska Gora, Mojstrana, Jesenice, Tržic, Solcava, Slovenj Gradec
Difficulty
Although the Karavanke lack the steep rock and barren heights of the nearby Julian Alps, several of the peaks are over 2000m and many just under this altitude; a number of the walks include short steep sections of rock protected with steel cable and pegs; all routes graded
Must See
Major peaks in the Karavanke are: Stol - the highest at 2236m and a stunning backdrop to beautiful Lake Bled; Uršlja Gora - the furthest eastern peak with its fine summit mountain; the majestic Košuta ridge Olševa with its prehistoric cave; Golica in May for the white daffodils