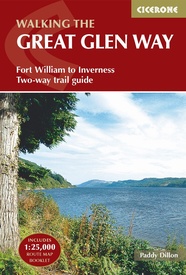 Uitstekende wandelgids van de Great Glen Way, waarbij naast alle noodzakelijke informatie ook gebruik gemaakt wordt van de echte topografische kaart. inclusief gidsje met routekaarten van 1:25000 (deze is hier ook los te bestellen)
Guidebook to walking the Great Glen Way, one of Scotland’s Great Trails that runs along the Great Glen between Fort William and Inverness. The guidebook - which includes both a guide to the route and a separate OS map booklet – describes the route in both directions.
Ideal as an introduction to long-distance walking, the 79-mile Great Glen Way is split into six stages easily walked within a week, with high- and low-level options given for two of these. An alternative route past the northern side of Loch Oich (via Invergarry) is also described.
The guidebook includes practical information, 1:100,000 OS mapping, step-by-step route descriptions for every stage of the walk and lists the facilities found along the way. A separate booklet of 1:25,000 OS mapping provides all the mapping needed to walk the trail. The trail stretches alongside the scenic Caledonian Canal, which links Loch Lochy and Loch Oich with the famous Loch Ness. The route uses undulating forest tracks, lakeside paths, old drove roads and military roads, as well as contrasting stretches over heather moorlands or through city suburbs. The Great Glen is one of the most remarkable features in the Scottish landscape - a ruler-straight valley along an ancient fault line through the Highlands.
The route in this guidebook is described in both directions, and given the connection with the West Highland Way at Fort William there is no reason why both trails shouldn’t be walked together in one long journey between Glasgow and Inverness, or vice versa.
Steden en Dorpen
Inverness, Drumnadrochit, Invermoriston, Fort Augustus, North Laggan, Gairlochy, Fort William