The Eagle's Way across the Austrian Tyrol 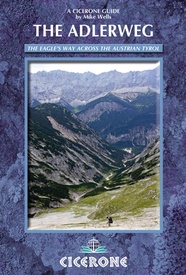 An essential guidebook for anyone walking the Adlerweg, or Eagle's Way across the Austrian Tyrol. The 300km waymarked route from St Johann to St Anton follows established mountain and valley tracks. 6 low-level alternative stages and a challenging 8 stage variant are included, with suggestions for a 15 day and 21 day itinerary.
The Adlerweg or Eagle’s Way is a well maintained and waymarked 300km path traversing the length of the Austrian Tyrol from St Johann in the east to St Anton in the west.
The Adlerweg is a summer walk with a season from mid-June to early October, although after heavy winter snowfall significant snow may remain at higher altitudes until mid-July.
It is possible to walk the entire route in 15 days, but this requires an average of seven hours walking every day, covering 20km, mostly above 1000m. If you wish to take it more gently, five hours walking, covering 14km per day will enable you to complete the trek in three weeks.
This guidebook describes six easier variant stages that avoid the more airy parts, and eight more difficult ‘Alpine’ Stages that provide an alternative high-level trek through the Lechtaler Alps.
the first English-language guide to the route
variants make it as easy or challenging as desired
fit walkers could complete the route in two weeks.
There are two ways to soar among the magnificent peaks of the Tyrolean Alps. One is in an aeroplane as you fly into Innsbruck. The other, more challenging and exciting, is to follow the Adlerweg as it crosses the entire length of the Tyrol from St. Johann in Tirol in the east, to St. Anton am Arlberg in the west. Not only will you experience the Wilder Kaiser, Brandenberg, Rofan, Karwendel, and Lechtaler Alps close up, but you should also have spectacular distant views of Austria’s other principal mountain ranges including Grossglockner, Grossvenediger, and the Tuxer and Stubai Alps. As a bonus, you will pass immediately below the towering south face of Zugspitze, Bavaria’s (and Germany’s) highest mountain.
The main route of the Adlerweg is a 300km (188-mile) long-distance path traversing the Austrian Tyrol, keeping mostly to the mountains that form the northern side of Inntal, the Inn valley. It is made up of 23 principal stages, with a total height gain of nearly 17,000m. In addition, there are six easier variant stages that avoid the more airy parts, and eight more difficult ‘Alpine’ stages that provide an alternative high-level route through the Lechtaler Alps. Well maintained and waymarked throughout, the Adlerweg follows established mountain and valley tracks and allows you to reach the tops of two mountains, Rofanspitze (2259m) and Birkkarspitze (2749m). Accessible to walkers of all abilities, it can be completed by a fit walker in 15 days, although if you wish to take things more gently, and allow time to visit attractions en route, it would be best to allow three weeks. Most of the stages are well connected by public transport (train, postbus, cablecar and chairlift), making it possible to tackle shorter trips as day excursions or weekend overnight breaks.