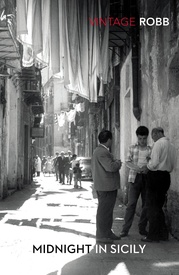 Peter Robb's journey into the dark heart of Sicily uses history, painting, literature and food to shed light on southern Italy's legacy of political corruption and violent crime. Taking the trial of seven-times Prime Minister, Giulio Andreotti, for alleged Mafia involvement as its starting point, Midnight in Sicily combines a searching investigation with an exuberant, sensual appreciation of this beautiful and bewildering island.
Recensie(s)
One of the greatest charms of Robb's book is his evident delight in southern Italy, particularly its food, which is recorded with such intensity of memory that one can almost taste it... As an introduction to post-war Italy, to the country as well as its politics, it can have few equals -- Caroline Moorehead Times Literary Supplement Robb writes brilliantly about the cycle of violence in southern Italy. This unclassifiable book melds politics, the mafia, travel, autobiography and serious cooking -- Andrew Taylor Independent I love this book. It left me in a sweet and sour mood of exultation, grief, despair and hope which lasted for many days -- Peter Goldsworthy Australian Review of Books One of the finest books on the Italian south. [Peter Robb's] analysis is as riveting in its commentary on modern Sicilian life as The Leopard was to an earlier generation The Economist Peter Robb manages to celebrate the literature, art, manners and food of an entire region. His book is a masterpiece of elegant, sceptical enquiry and a pleasure to read -- Ian Thomson Evening Standard