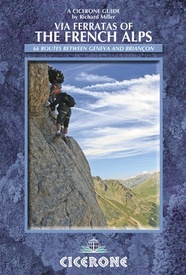 This guidebook covers 66 varied via ferratas in the French Alps. The routes are spread over six areas: Geneva and the Northern Alps, Chambéry, Tarentaise and Maurienne valleys, Grenoble and Briançon, amid the Mont Blanc, Vanoise and Queyras ranges. Difficulty ranges from easy, protected routes through to exposed, technical challenges.

With some of the most beautiful scenery in the world, the French Alps have long been a popular destination for a wide range of outdoor activities. In recent years, the region has seen the arrival of a growing number of via ferrata routes.
Via ferrata climbing – using fixed cables, bridges and ladders to explore terrain that is normally only accessible to experienced rock climbers – combines elements of scrambling, mountaineering and rock climbing, yet is a very distinct pursuit. Increasingly popular, recent years have seen a surge in the number of routes being established in these iconic mountains.
The routes in this guidebook range from straightforward, protected walks suitable for beginners and children, through to highly strenuous and massively exposed challenges suitable only for those with experience. The guide gives full explanations of all the techniques and equipment required and all routes are graded for difficulty, exposure and seriousness.
Geneva and the Northern Alps - the area covered in this chapter encompasses the Chablais, Haute Giffre, Borne, Avrias and Beaufortain ranges within the Alps as well as the southern end of the Jura Massif. The 12 via ferrata routes described are spread out over a fairly wide area, and are fairly representative of French via ferratas, being quite varied in both style and difficulty.
Chambery - the small city of Chambery, scenically located in a wide valley between two mountain ranges, is the capital of the Savoie department. Most of the routes in this chapter are located in the Chartreuse and Bauges massifs. They are mostly sports routes, which involve little rock contact, and several of them are suitable for novices.
Tarentaise - the Tarentaise Valley encompasses the upper reaches of the River Isere, from Moutiers in the west to Val-d'Isere at its eastern extremity. All the routes in this chapter are situated just to the south of the valley, within in the northern half of the Vanoise Massif.
Maurienne - the majority of routes in this chapter are located along the course of the valley of the River Arc. All of the routes in this chapter are sports routes that do not involve large amounts of rock contact. Most of them are fairly easy with only a handful of more difficult routes. Several of the easier routes would serve as ideal introductions to the activity.
Grenoble - the nine via ferratas in this chapter include an even mixture of sports routes and mountain routes. They are mostly mid-grade option and are not suitable for absolute beginners.
Briancon - of the via farratas covered in this chapter, two are in Briancon itself, three are to the north of the city along the Guisane Valley and 11 are located to the south. The routes are representative of a good range of difficulties, and quite a few of them involve more rock contact than is typical of French via ferratas. A number are suitable for novices.
66 varied routes across six areas: Geneva and the Northern Alps, Chambéry, the Tarentaise and Maurienne valleys, Grenoble and Briançon, routes illustrated by sketch maps and topo diagrams, glossary of via ferrata terminology and a list of useful French words and phrases
Seasons
the bulk of the routes are open from early summer to mid-autumn, with a fair number being open from early spring to early winter depending on local weather conditions
Centres
Geneva, Chambéry, St Jean de Maurienne, Grenoble, Briançon as well as numerous mountain resorts
Difficulty
a wide range of routes from straightforward protected walks ideal for beginners to highly strenuous, massively exposed endeavours suitable only for the most daring. All routes graded for difficulty, exposure and the seriousness of the environment. A full explanation of the techniques and equipment required is given
Must See
Routes on or near the Mont Blanc Massif, Lac Bourget, the Beaufortain Massif, the Vanoise Massif, the Chartreuse Massif, the Écrins Massif, the Queyras Massif and many other scenic highlights of the French Alps