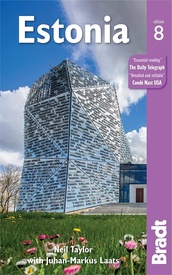 This extensively updated guide is essential for those wishing to explore this beautiful Baltic state. Detailing the country's medieval capital, Tallinn, the guide escorts the visitor down its timeless cobbled streets and pinpoints architectural highlights. Extensive coverage is given of the country’s complex cultural history, and its best artists, writers and musicians. With generous information on sites of interest and vital practical information, this guide remains a lively companion before, during and long after a visit to Estonia.

• A new section on Narva, for travellers en route to Russia.

• Tallinn’s historic landmarks, including city walks.
• Tours through national parks and nature reserves.
• Seaside spas and the islands, with suggested drives.
• Manor houses, windmills and museums where visitors can experience the old-world charm of Estonia.
• Information on accommodation, restaurants and nightlife.

Bradt's Estonia remains the only English-language guidebook to this Baltics destination and this eighth edition reveals more of the country than any previous guide. Offering extensive coverage of Estonia's complex cultural history and its artists, writers and musicians, alongside comprehensive practical information, Baltics expert Neil Taylor MBE proves that there's much more to Estonia than the cobbled streets and cafés of Tallinn.
Extensive background and practical information is followed by detailed coverage of the fairytale city of Tallinn and the surrounding area, as well as dedicated chapters on north, south, west and central Estonia. Read about John Quincy Adams' visit to Tallinn in 1814, Jack Kennedy's in 1939 and Barack Obama's in 2015. Discover The Windtower at Käina on Hiiumaa Island, a totally 21st-century experience of the countryside and sea, as stimulating to the ears as it is to the eyes; and explore Estonia's maritime history at state-of-the-art Seaplane Harbour. Visit Narva, where 95% of the population speak Russian, but all the signs are in English; and learn why an Estonian President insisted on holding a press conference in a toilet!
From Rakvere, Tapa and Lake Peipsi to Põlva and the Russian Borderlands and the islands of Kihnu, Saaremaa and Vormsi, Bradt's Estonia reaches all corners of the country.