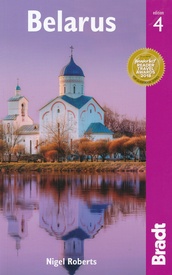 This new, thoroughly updated edition of Bradt's Belarus remains the only full-blown standalone guide to the most westerly of the constituent republics that formed the Soviet Union prior to the break-up in 1991. Written and updated by expert author and Russian speaker Nigel Roberts, who has been travelling throughout the country for over 17 years, it is the definitive guide to understanding, and making the most of a visit to this much-misunderstood nation.
Included in this new edition is a detailed focus on the capital city Minsk, the most likely destination for first-time travellers and now becoming a major European capital city thanks to an easing of visa regulations, as well as coverage of each of the other five cities and all six regions. Roberts draws on his years of experience and shares many stories and vignettes of his own adventures and experiences of everyday life, all of which help to bring the destination to life. In addition, there are recommendations and tips from his wide circle of contacts, including people at all levels of the tourism industry, charities working on the ground, local people and travellers from abroad, who regularly share details of up-to-the-minute information, changes and developments.
With Bradt's Belarus enjoy the opportunity to put the cliché to the test; only ever described by Western media as 'the last dictatorship in Europe', travellers certainly do have the opportunity to experience elements of life as it was lived in the days of the Soviet Union but can also see beyond the cliché as Belarus seeks to free itself from the Soviet past and establish its own heritage and place in the modern world. Discover beautifully preserved and restored museum towns such as Mir, Njasvizh, Novogrudok, Pinsk and Polotsk; see Soviet-style brutalist and modernist architecture; explore accessible national parks and vast areas of unspoilt wilderness, with ample opportunity to study flora and fauna; visit historic palaces and castles stunningly restored; and enjoy the unconditional hospitality of a people who are anxious to interact with visitors from the English-speaking world.