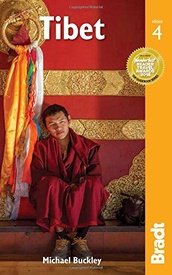 his new, thoroughly updated edition of Bradt's Tibet encompasses the wider region of ethnic Tibet with more detailed coverage of the Amdo and Kham regions than is found in other guides. It also includes essential information on new border openings and is particularly strong on map data, which is extremely difficult to find in Tibet itself, including new theme maps covering a range of topics, from Tibetan regions to the Three Parallel Rivers UN World Heritage Sites, sacred landscapes, permafrost and major river sources.
Bradt's Tibet benefits from years of consistent research. Michael Buckley has been visiting and researching Tibet for more than 30 years and has a raft of books to his name. Thanks to his knowledge and expertise, Bradt's Tibet offers a more extensive language appendix than is found in other guidebooks, plus essential guidelines on cultural etiquette (including a special section on hand gestures to use), local customs and travelling with minimum impact on Tibet's culture and environment. There is also an appendix on fauna and an extensive list of recommended further resources, including books, music, films and even virtual reality
Exploring ethnic Tibet independently is a challenge. The 'land of snows' possesses the world's highest peaks (including Everest) and its deepest gorges as well as some of the wildest and roughest road routes in high Asia. Bradt's Tibet provides all the practical information you need to explore ethnic Tibet independently, whether motoring, mountain-biking or trekking.
Tibet has always fascinated travellers and armchair travellers because it is so difficult to access due to its remoteness and extreme altitude. Now, under Chinese rule, Tibet is a sensitive destination for Westerners. Visitors needs all the information that they can lay their hands on-and this guidebook provides plenty. With flight routes and rail access to Tibet expanding, and new border crossings opening, Michael Buckley and Bradt's Tibet provide all of the information you need to make the most of a trip.