One trail to rule them all 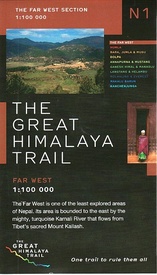 Prachtige kaartenserie van één van 'swerelds mooiste wandeltochten.
The Far West is one of the least explored areas of Nepal. Its area is bounded to the east by mighty, turquoise Karnali river which flows from Tibet’s sacred Mount Kailash.
Myth and superstition remain part of the fabric of life here. Though the Nepali language originated here, it seems a distant world from ‘modern’ Nepal. One Nepali visitor described his visit as “fascinating, like travelling back to the 18th century.”
Along the trails you may meet a turbaned Dhami, a shaman, with silver-bangled limbs and gold-ringed ears, who are still depended on for treating sickness.
Organised tourism has so far been limited to Khaptad National Park, the only national park in the mid-hills of Nepal and held dearly by conservationists. Gentle hills, pristine forests and abundant wildlife with a snow-covered backdrop of the Nampa, Api and Saipal peaks make for beautiful trekking.
It’s also a holy place associated with Khaptad Swami, a great ascetic who was renowned for his wisdom. He lived to be 110 and people travelled from far to receive blessings from him in his cave dwelling.
The Jestha Purnima (June full-moon) festival attracts thousands to Tribeni, at the confluence of three rivers, to worship at Shiva’s shrine.
The lower route of the GHT passes just to the north here and it will one day connect Rara with the trail in India. Trekking here is less easy than elsewhere – porters are difficult to find and current maps lack detail. With patience however, and a sense of adventure, you’ll find your journey into this forgotten world to be an experience you’ll never forget.
The Chamar’s Dashain
During the Dashain festival, bull fighting, sadey judhai, takes place with the animals fuelled with rice-wine and cannabis sativa. The loser becomes dinner and the winner enjoys a year with the cows. You’ll see only the Chamar people celebrate Dashain in this way close to the border with Humla.
Ramaroshan
Lord Krishna once grazed his cows in nearby Ramaroshan, an area of lakes and lush green pastures, known as Patans. His cows were provided with very comfortable shelters. People who later came to live here and moved the cows out and lived in their shelters. The cows became wild, stopped giving milk and the people were cursed. To this day, some cow shelters are grander than people’s houses.