An illustrated history, anthology and guide 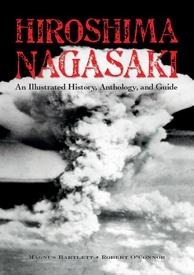 Deze gids combineert geschiedenis, cultuur en reisinformatie in één. Voornamelijk geschikt als je meer te weten wilt komen over de rijke historie van deze twee steden. De reisinformatie beperkt zich tot ongeveer 40 pagina's.
An ambitious blend of history ancient and modern, literature and poetry, photography and art,... yet still also a travel guide: this is Odyssey's guide to the Japanese cities of Hiroshima and Nagasaki, by Magnus Bartlett and Robert O'Connor. Released in 2015 to coincide with the 70th anniversary of the atomic bombings. A powerful and thought-provoking read that - as with all Odyssey Guides - will challenge, inform, and inspire visitors and armchair travellers.
On August 6, 1945 at precisely 8.15am, the world changed forever. An atomic bomb was dropped on the Japanese city of Hiroshim and another would drop on Nagasaki three days later: both cities – and their populations – were destroyed.
This unique and eclectic book takes the reader through seven centuries of Japanese history, showing the significance of the two cities and their environs. Using rarely seen photographs and a wide range of extracts from literature, art, and film, it details the events leading up to and after the bombings, and also provides invaluable travel information for the modern-day visitor.
With the passing of the 70th anniversary of the bombings, this milestone book will prepare those who plan on making a pilgrimage to the cities, and promote lively discussion about nuclear weapons and their place in the modern world.