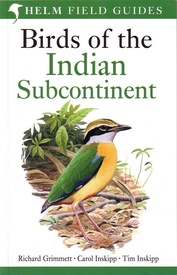 This is the second edition of the authors' groundbreaking Birds of the Indian Subcontinent (1998) and covers all the bird species found in India, Pakistian, Sri Lanka, Nepal, Bhutan, Bangladesh and the Maldives. The plates face the descriptions and maps for quick at-a-glance reference. Many of the plates have been repainted for this edition and a number of new species added. This guide also provides tables, summarising identification features of particularly difficult groups such as nightjars, warblers and rosefinches.
"[...] Overall, Birds of the Indian Subcontinent is an excellent piece of work and a very welcome field guide, and I am greatly looking forward to using it on my upcoming trip to Arunachal Pradesh and Assam. Comprehensive and authoritative, this is an indispensable guide for anyone birding anywhere in the Indian Subcontinent."
- Frank Lambert (22-02-2012), read the full review at The Birder's Library
"The Indian subcontinent, always exciting for visitors, is no less exciting for birders. Since publication of these authors’ handbook to the region in 1998 (and the pocket guide derived from it in 1999, both published by Helm), the discovery of serendib scops Owl Otus thilohoffmanni in Sri Lanka and bugun liocichla Liocichla bugunorum in Arunachal Pradesh have fired the imagination and added to the area’s allure. Between these far-flung extremities, over 1300 species have been recorded within the countries covered: India, Pakistan, Nepal, Bhutan, Bangladesh, Sri Lanka and the Maldives. Many interesting taxa have been elevated to species level with probably more soon to follow. In addition, our ever-increasing knowledge of identification, behaviour and distribution all amply justify a new and revised edition.
Birders will however be understandably wary of yet another Helm guide to the region. A series of regional guides to the subcontinent, published since the pocket guide, added nothing to the original volume. There is no excuse for such lazy publishing and with a number of other field guides now on the market, the visiting birder has a choice of which to take. To regain its former pre-eminent position among these, this new edition will have required much work.
With 528 pages to the pocket guide’s 384, the extra space is both welcome and well used. The commonly encountered starlings and mynas, for example, are now displayed over three plates rather than two cramped ones. This has also enabled the distribution maps to be placed alongside the species accounts whereas before they were often annoyingly distant. Many species have been repainted for this edition and the maps revised, both being enlarged and largely for the better. The species accounts too have been largely rewritten, the identification section comparing similar species – often a great improvement on the brief texts of the pocket guide (where separating grasshopper warbler Locustella naevia and Pallas’ grasshopper warbler L. certhiola was covered in two lines without mentioning tertials!). I would have liked to see more information in the habitat and habits section, often a good clue to identification, but this is invariably very brief. Altitudinal range could have been included for montane birds, the Himalayan avifauna being a major component. It is included for the very similar green-crowned Seicercus burkii and whistler’s warblers S. whistleri, which are separated by altitude, in the breeding season at least, and thus is useful in identifying them. Field users will also be relieved to find that the families appear in a modern yet orthodox order, the taxonomy adopted by the pocket guide being too unfamiliar to allow easy use.
Much as the original books were a vast improvement on anything that was available before, so it is with this guide. The authors and artists additional and welcome hard work has resulted in better plates, text and maps incorporating all known and possible splits and much other new information, rendering this single volume pretty much indispensable to a birder travelling in the subcontinent.