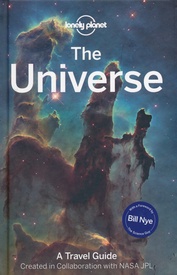 Let Lonely Planet take you further than ever before with the world's first and only travel guide to the Universe. Developed with the latest data from NASA, we take you from our home on Earth and out into the far reaches of the solar system, then into our neighbouring stars and planetary systems, and finally into the rest of our galaxy and the Universe.

This fascinating journey will help you explore space as you would the world with a Lonely Planet guide. Unique to these pages are wonderful comparisons of Earth with the other worlds of our solar system and even those exoplanets orbiting other stars.

You'll discover as much as we know about our celestial neighbourhood, and our place in it. In addition to planets and moons, get to know our Sun, explore the asteroid belt and the Kuiper Belt, and learn what lays beyond, in interstellar space. Outside our solar system, travel to some of the notable neighbouring stars, stellar systems and exoplanets we've discovered. You'll understand how we search for planets where life might exist and the stars they orbit.

Finally, discover the edge of the observable Universe. Get to know the structure of the Milky Way as well as an orientation to neighbouring galaxies like the Andromeda Galaxy which is visible from Earth. Then explore other galactic formations and learn about galactic clusters and superclusters. By the end of the book, you'll have a sense for the structure of the entire Universe as well as some of the big questions we still have as we ponder our place in it.

About Lonely Planet: Lonely Planet is a leading travel media company and the world's number one travel guidebook brand, providing both inspiring and trustworthy information for every kind of traveller since 1973. Over the past four decades, we've printed over 145 million guidebooks and grown a dedicated, passionate global community of travellers. You'll also find our content online, on mobile, video and in 14 languages, 12 international magazines, armchair and lifestyle books, ebooks, and more.