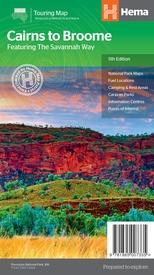 Find out all you need to know about travelling the Savannah Way between Cairns and Broome. As well as providing a detailed road map for the entire length of the Savannah Way, this map includes handy advice on road conditions, average rainfall and safe driving tips. The useful information also highlights the features you pass in Queensland, Northern Territory and Western Australia.

Routes between Cairns and Broome in Hema’s range of very popular touring maps showing roads connecting Australia’s main centres of population along some of the most spectacular routes such as the Great Ocean Road or the Savannah Way. The maps highlight 24-hour fuel supplies, roadside rest areas, camping facilities, places of interest, etc., and include distance charts and, in some titles, city maps. Road network indicates unsurfaced roads and tracks. The maps also show railway lines. There is no topographical information beyond names of mountain ranges and selected peaks, plus rivers and lakes, but national and state parks, conservation areas and reserves, and aboriginal lands are all highlighted. The maps have a grid showing latitude and longitude at intervals of 1º or 2º.

In this title: double-sided map showing the road network along Australia’s northern coastline and highlighting the facilities along the Savannah Way, its variants, and other main roads and tracks such as the Explorer Highway, the Matilda Highway, etc. Fuel symbols indicate the type of fuel available at stations. Both local railway lines and the Australasia Railway from Darwin towards the centre and Adelaide are also shown. Tables provide list of facilities within the national parks in all three states covered by the map, distances and rainfall along the Savannah Way, plus notes on driving conditions, places of interest, etc. Latitude/longitude grid is at 1º intervals.