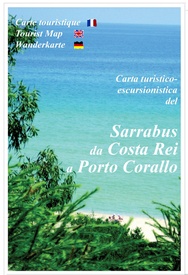 Sarrabus is a territory that is not known by everybody yet. Here lies its charm and this has made possible to keep this environmental area out of big building speculations and also out of history. In fact it preserves little traces of the past, and paradoxically the remains from the prehistoric age are more meaningful than those back to more recent times. We can find traces from the most remote past not far from the State Road SS125, that from Muravera goes to Costa Rei, by visiting the nuraghe Murtas, the nuraghe S’Aqua Secis and the megalithic complexes of Scalas and Cuili Piras. They are about ten menhirs, almost fully intact, arranged in groups and fixed in the ground in the original orthostatic position. They have been put in relation with the position of the sun and the moon, at dawn and at sunset. In fact they were used as a very precise astronomic calendar but also for religious purposes since they represented both the masculine divinity and the fertility according to the worship of the proto-Sardinian populations. At  200 meters of distance from the beach of Costa Rei  we can also visit the complex of Piscina Rei, back to 5000 years ago. Its peculiarity is the presence of a block of granite that was used with the function of an altar for sacrifices, since it has a cavity apt to contain liquids. Going back to the north, to St. Vito, adjacent to the State Road  and well indicated by signs, we can see the nuraghe Asoru, characterized by a trilobate structure. There are many more remains from the Proto-Sardinian age but their value has  not been exploited yet , neither they have been arranged in a such a way so as to be reached easily by visitors. The remains from the Roman and the medieval ages are on the contrary just a few, since these territories were abandoned because of the continuous Islamic and piratical raids. This is witnessed by some sentinel towers that were built between the 14th and 17th cent., that is, from north to south, the tower of Monti Ferru, the tower Salinas, the one of the Ten Horses and that of Porto Corallo.

The coast of Sardinia on a series of contoured, GPS compatible maps at 1:60,000 from Ed. Abies with extensive tourist information including special recreational routes, plus additional coverage at more detailed scales of selected popular areas.

Main series at 1:60,000 (Nos. 1 to 12) The maps have contours at 100m intervals and colouring for woodlands and maquis shrubland. Local trails are highlighted, with additional overprint for selected hiking, mountain bike and kayaking routes listed on the reverse of the maps with brief notes and grading for the degree of difficulty. All the maps have a UTM grid for GPS users. Very extensive range of symbols highlight numerous places of interest and tourist facilities, including campsites and caravan parks, beaches, sport and recreational sites, archaeological remains and nuraghi, etc. The maps also indicate places where typical local products can be purchased. On the reverse each title has descriptions of its main places of interest, beaches, etc. More detailed maps at 1:25,000/1:30,000 (Nos. 3A to 12A) Contour interval is 25m, plus colouring for vegetation. Local trails are marked but unless indicated in the individual description, special routes are not included. Tourist overprint is also less extensive than on the 1:60,000 maps. Most titles have GPS coordinates. On the reverse are extensive notes describing the area. For more details see individual descriptions.  Map legend and additional text on all the maps includes English.