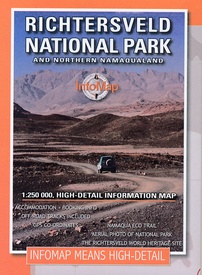 Wegenkaart met toeristische informatie en geschikt voor gebruik met GPS
The original InfoMap! Now in its 8th edition this map remains as popular as ever. For those who don’t know, the Richtersveld National Park is a 160 000 hectare national park found on the banks of the Orange River in South Africa’s Northern Cape. It is the only mountain desert park in Southern Africa and is one of the few national parks in which you are not confined to your car. Dry, arid with a feeling of isolation, life in the park is influenced by the mist created by the cold Atlantic Ocean. Known to the local Nama people as ‘malmokkie’ it brings moisture to an otherwise parched land. Despite its lack of rainfall the area is rich in flora containing many species, like the Halfmens, which exist nowhere else on earth.
The area has long been a favorite for botanists, photographers, lovers of remote places and 4×4 enthusiasts who flock to this corner of South Africa for its unique character, isolation and feeling of wilderness. If visiting the park why not spend a few nights under the trees along the Orange River – South Africa’s biggest river – relaxing while monkeys and mongeese run along its rocky banks; or shout into Echo Canyon from beside the impressive Tatasberg; or cross into Namibia via the Sendelingsdrif ferry.
This map also includes the Richtersveld World Heritage Site, an area equal in size to that of the National Park – equally impressive, remote and alluring. Visit the villages of Eksteenfontein and Lekkersing and sample traditional Nama food. Drive to Alexander Bay or spend time in the seaside town of Port Nolloth.
The map includes detailed route and travel information for the National Park, the World Heritage Site and surrounding areas. It also includes an inset with the popular Eco 4×4 route – South Africa’s longest 4×4 route. Details on this edition include GPS points, distances, useful contacts numbers, accommodation and booking information PLUS a large-scale detailed aerial photograph of the National Park on the back of the map with road overlay.