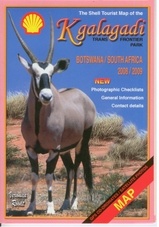 The map: The map consists of a large map of the entire Park on the front of the map. On the back is enlargements of six maps - the South African side, Mabuasehube, Swart Pan area, Gemsbok Wilderness Trail, Mabuasehube Wilderness Trail and of the Kaa Kalahari Concession. Satellite images were used and the roads were tracked by GPS. There are 168 GPS coordinates on this map.

Establishment of a Transfrontier Park: On the 7 th of April 1999 Botswana and South Africa signed a bilateral agreement in which they agreed to manage their adjacent national parks, Gemsbok National Park in Botswana and Kalahari Gemsbok National Park in South Africa, as a single ecological unit – the Kgalagadi Transfrontier Park. It is the first formally declared Transfrontier Park in southern Africa, but there are more underway. There were no human made barriers in the past but the parks were managed separately. Tourists are able to move freely within the park and they have a unified set of regulations. Management of internal affairs remain separate. Entry and camping fees on both sides are similar, depending on the exchange rate.

Botswana side: The Botswana side of the park has been maintained in a natural condition as far as possible. The camping sites – there are no lodges or chalets – are in harmony with nature without any form of above-ground masonry. There are five areas of focus as far as visitors are concerned – the Nossob river valley, Mabuasehube, Swart Pan area and the two Wilderness trails (Mabuasehube 4x4 Trail and the Gemsbok Wilderness Trail). There are three public access routes - from Kaa gate to Nossob Camp, from Mabuasehube gate to Nossob and from Two Rivers to the Nossob valley.

South African side: The game-drive routes are mainly in the two river valleys – the Nossob valley in the north and the Auob Valley in the south. Most of the roads do not require 4x4 vehicles. The three main camps have small shops, fuel, chalets, accommodation and camping. Apart from the two roads linking the valley routes, there is now a 4x4 route that passes Bitter Pan where there is a beautiful lodge open to 4x4 travelers on advanced bookings only.

Where to stay or to camp:

Botswana side: On the Botswana side is only camping. All the sites are in natural settings, completely free of fences, giving one the opportunity to enjoy the Kalahari in its natural state. There are camping sites at Rooiputs and at Polentswa in the Nossob valley and several sites on the Swart Pan circuit and in the Mabuasehube area.

South Africa: There are three very well-equipped camps with chalets and huts, namely Twee Rivieren, Nossob and Mata Mata. They are all well developed and at Twee Rivieren there is also a restaurant. Each one of these camps has a small shop with meat, ice, soft and alcoholic drinks. There is fuel available at all three camps. All three camps offer night drives as well. There are also five new bush camps – Kalahari Tented Camp near Mata Mata, Bitterpan Bush Camp on the 4x4 route, Kielie Krankie, Grootkolk and Urikaruus, the latter three situated at the pans with the same names. They offer exclusivity, which one is not able to enjoy in the other camps.