A guide to one of the world's most scenic road trips 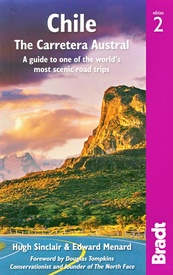 This new, thoroughly updated second edition of Bradt’s Chile: the Carretera Austral is written by resident expert Hugh Sinclair and remains a unique guide to this stunning and remote part of the world, complete with information which in some instances has taken over a decade of experience to compile. This is the only guidebook focussed entirely on the magnificent and historic road uniting northern and southern Patagonia. The few hardy travellers that embark on this journey struggle to find even basic information about the region. The book provides visitors to the often-visited Bariloche and Chilean Lake District with a spectacular alternative means to reach the southern extremes of Patagonia.
Completing three entirely new traverses of the Carretera Austral and speaking to countless visitors encountered along the way, the authors have updated the guide comprehensively while offering an expanded suggested itineraries section to aid in planning. Meanwhile increased focus on conservation is helping to preserve the region’s pristine beauty.
Packed with everything you need for a successful trip, from practical advice such as accommodation and eating options en-route to history, culture, trekking and rafting, new features and information include the Route of the Parks, details of new ferry services, coverage of islands previously not included, an expanded section on micro-breweries, new maps and further details on parks and reserves.
Increasingly established as one of the definitive road-trips worldwide, the Carretera Austral continues to evolve, firmly placing it as the definitive means to travel between northern Patagonia and the deep south. Bradt’s Carretera Austral offers everything you need to plan and complete a successful trip from the high Andes to the remote Pacific coast.
About the Author
Hugh Sinclair lives in Bariloche (Argentina) with his Dutch wife and two daughters. He is an author, economist, former investment banker, and has worked in the development finance sector for the last two decades. In 2001 he successfully established the Guinness World Record for the fastest traverse of the Americas (Prudhoe Bay, Alaska to Ushuaia, Argentina) by motorbike, fully sponsored and raising money for UK charity Action Aid. He has traversed the entire Carretera Austral fifteen times, by car and motorbike, including one trip with his heavily pregnant wife, and three trips with his eldest daughter, now aged 9, and a contributor to the ‘travelling with kids’ section.
This edition has been updated with the help of Edward Menard, a gap year student who was looking to do something exciting and innovative before starting his degree at UCL when he became involved with the Carretera Austral. With family in Bariloche and a love of the great outdoors, and unburdened by jobs and studies, he became an obsessive Carretera expert and spent days wondering about why huemuls are dying out and buses don’t ever arrive when expected, hoping that such insights may help others to explore this glorious region. Based in the south of England, he speaks Spanish and German.