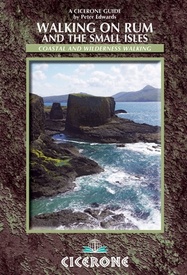 A handy guidebook to walking and backpacking in the Western Isles of Scotland on Rum, Eigg, Muck, Canna, Coll and Tiree including a tough 55km backpack around the coast of Rum, a circuit of the Rum Cuillin and an ascent of An Sgurr (Eigg). 16 routes across all the islands suitable for a range of abilities exploring coasts, mountains and wilderness.
The Small Isles, and the nearby Hebridean twins Coll and Tiree, offer adventurous walkers a fine range of routes, from the jagged volcanic peaks of the Cuillin on Rum to the beaches, dunes and machair pastures of its lower-lying neighbours. Many of the walks follow sublime coastlines, dotted with striking geological formations and teeming with wildlife.
Easier routes on Rum, along long-established paths, explore the National Nature Reserve with opportunities to spot deer, golden eagles, feral goats and Rum ponies along the way, and detailed information is included on each island's history, geology, wildlife, plants and flowers to help walkers make the most of their experience.
This guide describes 16 routes across Rum, Eigg, Muck, Canna, Coll and Tiree, suitable for a wide range of abilities, and exploring coast, mountains and wilderness.
15 day walks, including the Rum Cuillin, and one 3-day walk around the coast of Rum
illustrated with OS map extracts and inspirational photographs
with comprehensive information about travel, accommodation, equipment and other practicalities