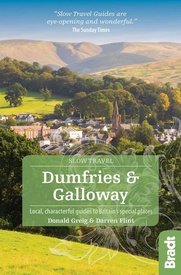 Written by resident experts, this new, thoroughly updated second edition of Bradt’s Dumfries and Galloway remains the only full-blown guide to this increasingly popular southwest corner of Scotland. The region is covered in depth, from Eskdale in the east to Scotland’s southern tip at the Mull of Galloway, via Annandale, Nithsdale, Dumfries, The Stewartry, The Machars and Moors, and the Rhins. Lively descriptions, historical anecdotes and enthusiastic writing combine with hand-picked accommodation recommendations to reveal one of Scotland’s best kept secrets.
New attractions and features covered in this edition include Kirkcudbright Galleries, an increased focus on wildlife and birdwatching, and a round-up of the many distilleries and breweries in the region. There are also specialist contributions covering everything from smoking fish and meat, creating a Himalayan garden in the hills of the Southern Uplands, conservation along the Solway coast, and the sport of curling. New walks and a good range of hotels and restaurants not previously included have also been added.
Dumfries and Galloway is proving ever-more alluring to discerning visitors in search of grand views, peace and isolation, bustling harbourside towns, craft shops and galleries, cafes and restaurants, mountains and coast, wildlife and outdoor pursuits. all the ingredients for a successful UK break. Even the weather can defy expectation, for the far west is warmed by the Gulf Stream and gardens here are replete with palm trees and southern hemisphere plants. You can be at Scotland’s highest village in the morning, on a deserted sandy beach in the afternoon, and in Europe’s first Dark Sky Park, gazing at the stars, in the evening. Wildlife lovers will also be in their element as all of Scotland’s ‘big five’ iconic species can be seen: golden eagle, red squirrel, harbour seal, red deer and European otter. In the surrounding waters look out for minke whales, porpoise and dolphins, while Caerlaverock at the eastern end of the region plays host each year to the staggering annual spectacle of thousands of barnacle geese settling on the WWT reserve.
No matter your interest, Bradt’s Dumfries and Galloway is an ideal companion for a successful trip.