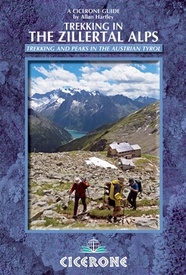 Guidebook to trekking the Zillertal Rucksack Route, which traverses the very best of the range located in the Austrian Tyrol spanning the Italy-Austria border. It links huts together along good tracks without having to cross glaciers, providing a continuous tour of around ten days. With opportunities to climb adjacent peaks.

Few areas can match the Zillertal, in the Austrian Tyrol, for a first Alpine season. Shapely peaks, good paths and some of the best huts in the Alps make it ideal for novices and experienced trekkers alike.
This guide describes two popular hut-to-hut routes, both of which can be accomplished in eight to ten days, with the option to add in day excursions from the huts to climb local peaks on both sides of the border, including the Zillertal’s highest summit, the Hochfeiler.
The Zillertal Rucksack Route, or Berliner Hoehen Weg, links eight huts without crossing glaciers or difficult passes, with ample opportunity for scaling nearby peaks. It starts above Mayrhofen and follows a circular route ending high above the charming village of Ginzling. The length of this tour is 70-80km, depending on your exact start and finish points, and ascends some 6700m. While there is no specialist climbing knowledge required for this route, some sections are very steep and in places fixed wire ropes are installed to aid stability.
The Zillertal South Tyrol Tour traverses the whole range along the Austro-Italian border, starting at Turistenraste then linking back to the Rucksack Route to make a circular tour. It is virtually unknown outside the South Tyrol, which helps make it into an interesting and unusual route choice. Overall it is about 55km long and ascends just over 5000m (not including any additional peaks.) It is a physically demanding trek, providing an excellent challenge to the more experienced alpine walker.
Both routes are illustrated with sketch maps and profiles.
Glossary, hut directory, alpine walking tips and lots of other practical information included.
Easy access to the routes from Mayrhofen.