Schirmeck to Lac Léman and the GR53 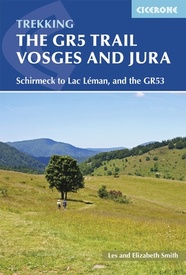 This guidebook describes a long-distance walking route through the delightful Vosges and Jura. Situated in France near the eastern border, the three regional parks of the Ballons des Vosges, Northern Vosges and Jura Mountains boast verdant forests, striking rock features and low rounded summits offering spectacular views. Yet, in spite of their extensive network of well-maintained paths, they are not high profile tourist destinations. This walk offers a chance to uncover the hidden secrets of this fascinating area, from its rich wildlife to ancient ruins.

Starting in Wissembourg at the northeastern tip of France, the route follows the GR53 southwest to Schirmeck, before picking up the central section of the much-celebrated GR5 (which runs from the Hook of Holland to Nice) between Schirmeck and Nyon on Lake Geneva. The scenery is as varied as it is beautiful, from the tranquil forests of the Northern Vosges to the impressive river gorges of the Jura, from long-forgotten castles to the charming half-timbered villages of old Alsace. Well within the capabilities of any moderately fit walker and clearly waymarked, the entire trek takes five to six weeks, although it could also be walked in stages.
The guide presents the route in 11 chapters, which in turn are broken into short sections of a few hours each, allowing for a flexible itinerary and easy route planning. There are also suggestions for shorter circular routes making use of sections of the GR53/GR5, as well as an overview of other long-distance routes in the region. A summary of local history, plants and wildlife and delicacies can be found in the introduction and appendices offer details of facilities on route and full accommodation listings. With clear route description and a wealth of information to help plan your trip, this comprehensive guide is an ideal companion to discovering this interesting and varied route.
Steden en Dorpen
Wissembourg, Saverne, Schirmeck, Ribeauvillé, Villers-le-Lac, Les Rousses, Nyon
GR-5