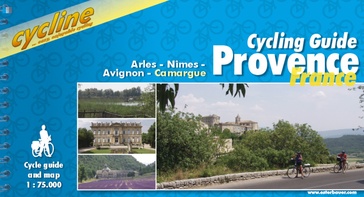 Provence – The name alone sounds inviting to every traveller. The region’s wonderfully mild climate and many quiet paved roads makes it an ideal destination for bicycle tourists year round. Let yourself be enchanted by ancient towns and historic monasteries, by the scent from fields of rich lavender, the charm of tiny villages and French joie de vivre. Enjoy the contrasts presented by the peaceful expanses of the Camargue, with its glittering blue bays and herds of Camargue horses grazing in a landscape dotted with brilliantly white farmsteads. A refreshing plunge into the Mediterranean is just one of the many highlights of this bicycle tour.

This Cycling Guide includes detailed maps of the countryside and of many cities and towns, precise route descriptions, information about historic and cultural sites as well as background information and a comprehensive list of overnight accommodations. The only thing this guide cannot provide is fine cycling weather, but we hope you find nothing but sunshine and gentle tailwinds.

Located between the river Rhône, the western Alps and the Mediterranean, Provence counts as one of the most delightful regions in Europe. Almost no area outside of Italy can boast as many Roman sites as the land of pink flamingos, wild bulls, white horses and fields of fragrant purple lavender.

For almost five centuries large parts of southern France were a Roman province – the name Provence is but one remnant of that legacy.
No other French region possesses as many ancient Roman structures as the former province Gallia Narbonensis. Among the most impressive buildings are the amphitheatre in Arles, the Pont du Gard, and the theatre at Orange.
The many local and municipal museums also contain a wealth of artworks and artefacts.

Many important artists made their homes in Provence. Vincent van Gogh is closely associated with the city St.-Rémy-de-Provence. Another famous onetime resident of this town is the physician and astronomer Nostradamus, who was born there in the 16th century.

Fontvieille became a popular tourist destination thanks to „Letters from my Mill“, the humorous collection by Alphonse Daudet.
As the Roman Empire declined in the late 2nd century and the 3rd century, Christianity extended its influence into southern France. The many cloisters and abbeys that the traveller finds in Provence testify to Church’s role through the subsequent centuries.

Another common sight a visitor to Provence encounters are the fields of lavender. Strictly speaking, the blue-purple plants are not real lavender, but lavandin, an easily-cultivated and productive hybrid of lavender. Though the demand for lavender is declining due to competition from synthetic scents, the main users of the fragrant plant remain the perfume makers in the nearby city of Grasse.
Before the Rhône reaches the Mediterranean, its fertile valley flattens into a wide delta. This is the Camargue, a photogenic landscape were the little white horses and wild black bulls graze. Cowboys in France are known as „Guardians“, and their work can be dangerous. They use not a lasso, but a long lance with three points called a „trident“.

Another symbol of the Camargue is a much less dangerous animal – the pink flamingo. These long-legged wading birds take their colour from the salt crabs that form a large part of their diet. Flamingos use their distinctive curved beak to filter the crabs, artemia salina, from the water.

That is Provence: Historic, multifaceted, and breathtakingly beautiful. We believe one of the best ways to discover and enjoy this famous corner of France is by bicycle.
We hope you will find this cycling guide to be a useful and reliable companion as you explore the countryside and cultural centres, and get to know the ”savoir-vivre“ of the people who inhabit this region. We wish you a memorable tour, and hope that your experiences in Provence stay with you long after you return to your daily life.