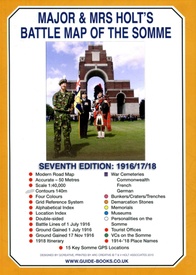 This is the only map available that shows the exact locations of 300 memorials and places of interest on the battlefields of the Somme
This Sixth Edition also covers the American and Canadian areas between Amiens and Montdidier.
It is double sided in four colours with an overall view on one side and a detailed view on the other, both showing battle lines and ORBAT information
There are detailed alphabetical and thematic indexes to all 300 points.
Size - The map measures 19.5 inches (49cm) by 28 inches (71cm). It is printed in four colours and is double sided on firm glossy paper.
On one side at a scale of 1:70,000 is shown the whole of the Somme battle area from Bullecourt in the north to Amiens in the south and from Doullens in the west to Pyronne in the east. Also on this side are the colour coded indexes and the map of the 1918 sector from Villers Bretonneux to Cantigny.
On the other side at a scale of 1:40,000 the battle area mostly, but not exclusively, associated with the 1 July 1916 operations is shown in great detail.Click here to view large image
What is Marked on the Map
There are about 125 memorials shown as well as over 150 cemeteries, 11 museums and a host of general information. Sites are precisely marked using coloured lollipops whose stick end indicates the exact position of what is represented. Thus -
Somme map key
Also marked are the front lines of 1 July 1916 giving the Army, Corps and Divisional boundaries for the British forces including their Commanding Generals. 1914/18 place names are marked in red, heights over 140m are shaded in grey clearly showing the barrier of the Thiepval - High Wood ridge and significant woods are coloured green.
Modern roads and motorways are shown and numbered enabling the map to be used for navigation as well as for relating to battle accounts