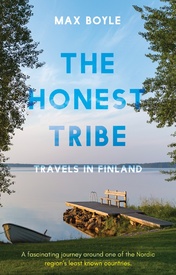 A fascinating journey around one of the Nordic region’s least known countries. A detailed exploration and explanation of the character of the Finnish people. The author’s family background gives him a unique access to this very private people.

At an age when many of his peers might be considering a cardigan and slippers lifestyle, Max Boyle departs his native Huddersfield for a backpacking journey in the southern regions of Finland. There he takes in the cities of Helsinki, Tampere and Turku, as well as many smaller towns and villages. Inspired by his own Finno-Ugric roots, he seeks out aspects of Finnish history and culture, enjoys boat trips in Finnish Lakeland and a not-so-daring funfair ride, discovers something of Finland’s celebrated heavy-metal scene, indulges in a traditional sauna and, not least, samples a variety of bars and restaurants.

The reason for the trip, however, is an enquiry into Finnish national character. During the course of his journey he conducts a number of interviews with those he encounters, examining their views on supposed Finnish characteristics such as sisu (a never-give-up attitude), concealment of feelings, modesty and, above all, ultra-honesty.

Variously basking in sunshine, assailed by rain, and targeted by mosquitoes, Boyle makes his way around the country’s South, home to the majority of Finland’s population, and duly encounters a people referred to by American Finnophile Richard D. Lewis as ‘the honest tribe’. This is an often a light-hearted journey around one of Europe’s most quietly successful countries.