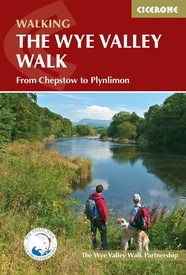 The official guide to backpacking or walking the Wye Valley Walk, 136 miles through the Welsh borders, crossing between south Wales and Herefordshire, from Chepstow to Plynlimon. Easy walking through wooded gorges, riverside meadows and open moorland, passing sites such as Tintern Abbey, Goodrich Castle, Hereford Cathedral and Hay-on-Wye.

The Wye Valley Way offers a perfect mix of river and hill walking as it follows the River Wye for 136 miles from river’s mouth at Chepstow to the slopes of Plynlimon in Powys criss -crossing the border between England and Wales. The walk leads through a dramatic limestone gorge, dense woodland beneath limestone crags and past peaceful river meadows in some of the most superb scenery in the heart of the Wye Valley Area of Outstanding Natural Beauty, the birthplace of tourism and the Picturesque movement. The route passes through historic Tintern, Monmouth and Ross-on-Wye and into the gentler rolling landscape of Herefordshire with black and white villages, famed cider orchards, landscaped parks and fertile agricultural plains into the rugged uplands of Powys.

The new official guide describes the whole route in detail, from Chepstow to its source in Hafren Forest, all illustrated with colour photographs and OS map extracts, and also includes a Wye Valley Walk passport, for walkers to collect stamps along the route for a permanent record of their journey.