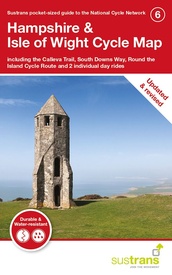 Deze kaart bestrijkt het volgende gebied:  Hampshire and the Isle of Wight.
Hampshire & the Isle of Wight Cycle Map | Sustrans Map 6
Sustrans Hampshire & the Isle of Wight map shows the National Cycle Network and local routes in this area. It is centred on the Hampshire & Isle of Wight area of the South East region of England, including Southampton and the New Forest, the South and Sussex Downs, Salisbury, Winchester and Chichester.
The National Cycle Network and tracks in Hampshire and the Isle of Wight
Hampshire is the largest county in the South East and has a great deal to explore. The South Downs and the New Forest National Parks are natural beauty spots dotted with pretty market towns and villages. The county’s big cities both offer many attractions: there is the large commercial port of Southampton and along the coast, Portsmouth, home to the Royal Navy and ferry links to the continent. A much shorter ferry ride away from Southampton, Portsmouth or Lymington is the Isle of Wight which flaunts spectacular white cliffs, sandy beaches, picturesque villages and a warm climate. The Solent is home to Britain’s largest sailing and boating community and the harbours and inlets on both the mainland and the Isle of Wight are crammed with yachts, giving a very nautical feel to places like Cowes and Lymington.
There is no better way to experience the delights of the Isle of Wight than the Round the Island cycle route. Alternatively, National Route 23 begins on the Isle of Wight as an old railway line connecting Sandown, Newport and Cowes. On the mainland the route winds north from Southampton through some remarkable countryside to Basingstoke, via the historic cathedral city of Winchester and then onwards to Reading.
The south coast is lined by National Route 2 partly running parallel to the Solent with great views of the Isle of Wight. For a rougher ride the South Downs Way is a long-distance footpath and mountain bike route that undulates all the way from Winchester to Eastbourne in East Sussex.
This pocket-sized colour map shows clearly mapped on-road and traffic-free paths, easy to read contours, and detailed inset maps for the major towns and cities as well as recommended linking routes connecting the NCN with quiet roads. The map also features 2 day rides with directions and a description of the area, highlighting key cycle routes, local history and places of interest.
Please see our interactive map for UK coverage of our pocket cycle map series.
The major routes shown on this map are:
National Route 2 between Bournemouth and Bognor Regis via Southampton and Portsmouth.
National Route 22 between Newport and Farnham.
National Route 23 between Basingstoke and Shanklin on the Isle of Wight via Southampton, Cowes and Newport.
National Route 24 between Salisbury and Eastleigh.
Route 222 from Portsmouth to Queen Elizabeth Country Park
National Route 224 from Farnham to Medstead and West Meon to Portsmouth
National Route 246 through Andover towards Romsey.
National Route 45 from Salisbury to Everleigh
The Round the Island cycle route on the Isle of Wight
The South Downs Way from Winchester east towards East Sussex.