Raad Ny Foillan - The Way of the Gull; The Millennium and Herring Ways 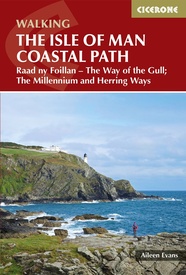 Guidebook to walking the Isle of Man coastal path, the Way of the Gull (Raad ny Foillan). The spectacular 98 mile route is described in 9 stages and takes in beaches, glens, moorland and rugged sea cliffs. It can be walked in around a week. Two other paths, the Millennium Way (Bayr ny Ree) and the Herring Way (Bayr ny Skeddan), are also described.
Seasons
Year-round walking on the Isle of Man is possible, although spring and summer weather is best. April, May and June are driest; May, June and July are sunniest; July and August are warmest.
Centres
Douglas, Ramsey, Castletown, Port Erin, Peel, Kirk Michael
Difficulty
Mainly coastal walking with short ups and downs. Stages up to 15 miles long.
Must See
Point of Ayre, historic Laxey, the cliffs and secluded bays and inlets of the south and west and the remote west coast. Sea life and birds.