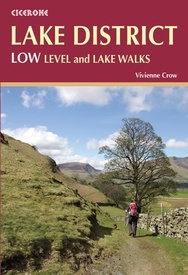 The Lake District offers some of the best walking in the British Isles, and contained within this book are 30 of the best low-level walks within the Lake District. This is an area that is justly famed for its magnificent scenery: from serene lakes and wooded valleys to spectacular hills and hidden tarns. But you don’t have to climb its highest mountains to appreciate this beauty; some of the region’s best walking can be enjoyed in the valleys and on the low fells.

Those who are new to walking in this much beloved corner of England will find gentle strolls, such as the circuit of Buttermere, as well as walks that provide a straight forward introduction to the low fells, such as High Rigg.
With her intimate knowledge of the National Park, Vivienne Crow knows just where to go to experience the best of the Lake District. In this book, she guides walkers to well-known beauty spots as well as some hidden gems – with background information on both the human and natural history adding to the experience.
30 graded day walks grouped by area, from 7-17km in length
with information about facilities en route and public transport options for each route
several routes in the South, North, Eastern, Western and Central Lake District
Seasons
All year - each season holds its own delights, but there's a chance of encountering snow from December to March
Centres
Coniston, Hawkshead, Grange-over-Sands, Grasmere, Ambleside, Elterwater, Windermere, Boot, Buttermere, Loweswater, Keswick, Braithwaite, Glenridding, Patterdale, Pooley Bridge
Difficulty
wide range of terrain from constructed trails to open fell; most of the walks easy to follow on the ground, although a few include short stretches of boggy moorland; no technical difficulties
Must See
Borrowdale's ancient woodland; beauty spots such as Tarn Hows and Orrest Head; tranquil lakeshore walks beside Ullswater, Buttermere, Grasmere and Crummock Water; spectacular waterfalls including Aira Force; Hardknott Roman Fort and stone circles; breathtaking views from Wansfell Pike, Latterbarrow and Hallin Fell
Steden en Dorpen
Coniston, Hawkshead, Grange-over-Sands, Grasmere, Ambleside, Elterwater, Windermere, Boot, Buttermere, Loweswater, Keswick, Braithwaite, Glenridding, Patterdale, Pooley Bridge