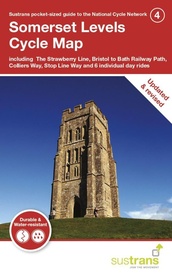 Somerset Levels Cycle Map | Sustrans Map 4
Sustrans Somerset Levels Cycle Map shows the National Cycle Network and local routes in this area. It covers the Somerset Levels area of the South West region of England, including Bristol, Bath, Glastonbury, Wells, Minehead and Yeovil.
The National Cycle Network and cycle tracks in Somerset
The Somerset Levels is excellent for cycling. Sandwiched between the Mendip Hills and the Quantock Hills (both Areas of Outstanding Natural Beauty), there are flat pleasant cycle routes linking fascinating towns like Bridgwater, Glastonbury and Wells. The iconic Glastonbury Tor can be seen for miles around and the town has a real spiritual feel. The tiny City of Wells boasts the 12th century Wells Cathedral as well as much other historic architecture. Bridgwater, perched on both banks of the River Parrett, was once a major port and an industrial centre of Somerset.
Routes covered include The West Country Way from Bristol to the edge of Exmoor, which is a common route for riders on their way from Lands End to John O’Groats. The family friendly Strawberry Line offers you a real taste of Somerset. It meanders through the Thatchers Cider orchards before reaching Cheddar, almost synonymous with cheese-making – Cheddar Gorge is also famous in its own right. Ride along the Bridgwater Taunton Canal or explore the steep country roads and pubs of the Quantocks, which is one of the country’s most visited mountain biking areas.
This map is ideal for those in Bristol keen to explore the southern surrounding countryside and the many great routes that branch south out of the city. The Festival Way is a fantastic gateway to North Somerset. The Bristol & Bath railway path guides riders to Bath World Heritage Site and to the incredible Two Tunnels Greenway, a route that features a 1672m cycle tunnel, the longest in Europe. Riders can even use the map to plan a route to the famous Glastonbury Festival.
This pocket-sized colour map shows clearly mapped on-road and traffic-free paths, easy to read contours, and detailed inset maps for the major towns and cities as well as recommended linking routes connecting the NCN with quiet roads. The map also features 5 day rides with directions and a description of the area, highlighting key cycle routes, local history and places of interest.
Major cycle routes covered by this map:
National Route 3 - West Country Way between Bristol & Dulverton
National Route 4 - Bristol & Bath Railway Path
National Route 24 - between Bath and Frome including The Colliers Way
National Route 26 - The Strawberry Line between Yatton & Cheddar, and between Glastonbury and Yeovil
National Route 33 - between Bristol and Nailsea (Festival Way) and Weston-super-Mare to Ilminster (Stop Line Way)
National Route 339 - between Barrington and Bridgwater
National Route 410 - the Avon Cycle Way - the southern half of this circular route
Regional Route 30 between Somerton and Castle Cary and Ilminster to North Coker