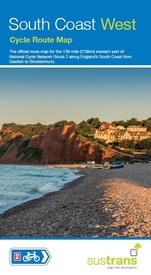 The official route map for the 136-mile (219km) western part of National Cycle Network Route 2 along England’s South Coast from Dawlish to Brockenhurst.
This linear map shows the route and immediate surrounding area over a series of separate map panels. The full colour map based on Ordnance Survey data shows clearly mapped cycle routes on traffic-free paths, quiet lanes and roads, with easy to read contours, route profiles and mile markers. Also features detailed inset maps for the major towns and cities, tourist info and cycle shop and hire information, and other local routes.
This western part of NCN Route 2 is simply a stunning ride. It takes in some of the most beautiful landscapes in southern England, going through two Areas of Outstanding Natural Beauty (East Devon and Dorset and passing close to two others (Blackdown Hills and Cranborne Chase) before finishing in a National Park (The New Forest).
Starting in the Victorian seaside town of Dawlish – currently the western terminus of NCN Route 2 – it follows the Exe Estuary Trail which runs up and down opposite banks of the estuary, a site of international importance for wading birds. Before swapping sides at Countess Wear, you could continue your ride up the River Exe and visit the historic cathedral city of Exeter with its numerous attractions, which is just a short detour away via NCN Route 34.
The Jurassic Coast World Heritage Site runs all the way from Exmouth to Studland and forms the backbone of this ride. Rolling Devon hills gradually turn into the chalk downland of Dorset which affords wonderful views of the sweeping Lyme Bay far below.
If you have time the harbour town of Lyme Regis is well worth a short diversion off NCN2, as is Weymouth with its mix of cool-but-quaint harbour area and traditional seaside holiday fare. Maiden Castle looms near Dorchester, and visits to nearby Lulworth Cove and Durdle Door are a must. From the heathland and ridges of the Isle of Purbeck you cross Studland and Poole Harbour. Gawp at some of the most expensive real estate in the UK at Sandbanks before negotiating seven miles of Bournemouth seafront, then return to tranquility enjoying a pleasant forested end to your ride at Brockenhurst.