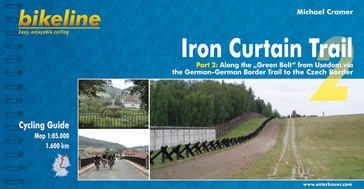 The Iron Curtain ran for about 7,000 km from the Barents Sea in the north straight through Europe to the Black Sea and divided the continent into East and West. Until the Peaceful Revolutions in Eastern and Central Europe, it stood as a physical and ideological border between two blocks which conceived each other as enemies. Not only were many neighbouring states divided, but also Germany was divided into east and west. Today there are only very few reminders left of the former death strip. However, the few remnants there still are do not separate us anymore.
The death strip in Germany
In Germany, the Iron Curtain ran for 650 km along the former Baltic Sea coast of the GDR, if one includes Rügen. The 1,400 km long former inner-German death strip was composed of 3,000 km of fences, 730 km of car-trenches, 830 observation towers, brightly lit roads, walls and bunkers. All this is now mostly gone. Only the military vehicle roads with their perforated paving stones and several observation towers remain. And it is only for another few years that one will be able to identify the former border strip due to the lower trees and the lighter green of their leaves. It has now been more than two decades since the Berlin Wall and the Iron Curtain fell and today the former German-German border is hardly visible anymore.
The Green Belt
The Green Belt, which was initiated by the “Federation for environmental and nature protection in Germany” (BUND), is the transformation from the death strip into a habitat for approximately 5,000 animal and plant life. In this place, one finds today 150 nature reserves, numerous flora and fauna, the three biosphere reserves Schaalsee, Elbaue and Rhön and also the Harz National Park. It is roughly 1,400 km long and is between 50 and 200 m wide. The area covers almost 18,000 ha, 85% of the landscape is wild, almost 30% is under natural protection and 38% is registered as habitats for flora and fauna.
In order to protect the former inner-German border, which serves as a habitat for more than 1,000 endangered animals and plant species, the BUND announced a fundraiser. In the four pilot regions Salzwedel, Eichsfeld, Sonneberg and Großen Bruch, it has so far bought over 200 hectares. This was made possible by more than 8,000 donations.
More information on this project can be found at www.dasgrueneband.info.
The route proposal
Of course there are many alternative routes to get around the "Green Belt" by bike. Whether cycling on the Western or Eastern side, closer to or further away from the border, whether taking former patrol roads with perforated paving slabs or asphalt, the proposed route - along the Western border of the Warsaw-Pact states - has been chosen according to the following five criteria: • as close as possible to the former border,
• on as comfortable a path as possible,
• avoiding roads with heavy traffic,
• integrating historical monuments,
• crossing the former border frequently.
The proposed route is a "work in progress". And of course, as locals know their regions better and due to the fact that there are frequent changes due to building measures etc., the author and publisher are more than happy to receive suggestions for improvement, bearing in mind the five criteria listed above.