From the source to the Rhine at Koblenz 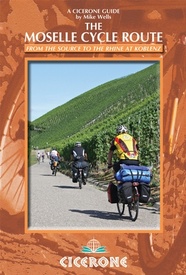 This guidebook covers the entirety of the Moselle river’s course, from its source in the Vosges Mountains of eastern France to its confluence with the Rhine at the west German city of Koblenz. The well-waymarked route reaches historic Nancy and Metz, crosses into Luxembourg and continues through the spectacular Mosel gorge, where the river cuts a sinuous path between the Hunsrück and Eifel Mountains.
The great attraction to a cyclist of following a river from its source is that, once you have reached the start, it's all downhill. From the easily reached source near the Col de Bussang, the Moselle cycle route descends over 650m to the Rhine at Koblenz. At Koblenz, the route can be linked with The Rhine Cycle Route.
In addition to the main route, excursions are described to visit Toul on the Boucles de Moselle, Luxembourg Ville in the Duchy of Luxembourg and through the Saar and Rhine gorges.
Accommodation and places to eat and drink en route are plentiful. Mostly off-road and on well-surfaced cycle tracks (mainly asphalt), the cycling is straightforward, and suitable for both experienced long-distance cyclists, and for those who have not done much cycle touring and wish to start with a straightforward, easily followed route. On occasions where roads are used, these are usually quiet country roads.
The Moselle cycle route mostly follows French and German national cycle trails, with a high standard of waymarking for most of the journey. This guidebook breaks the route into 14 stages, averaging just over 36km per stage. A fit cyclist, covering 2 stages per day, should be able to complete the trip in a week. In addition, there are two variants and two excursions that visit attractive locations just off the main route. Allowing two weeks would enable these to be included, provide more time for sightseeing and allow the route to be cycled at a leisurely pace.
14 stages covering 512km (with an additional two alternative stages, via Toul and Luxembourg City, and two off-route excursions through the Saar and Rhine gorges)
interesting historical and cultural notes on the many places passed en route
English–French–German language glossary
lists of contact details for tourist offices and youth hostels