essential guide to customs and culture 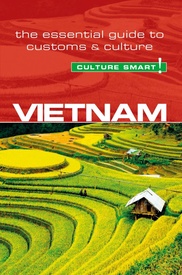 In the second half of the twentieth century war raged in Vietnam. It was hard to know if it would ever end, and harder still to understand fully the rights and wrongs of the various protagonists. At last, the North Vietnamese turned out to be tough, resilient, and ultimately victorious. Patience in adversity sums up the Vietnamese character.
After reunification in 1975 the Vietnamese experienced many difficulties. The immediate postwar years were harsh. Some fled into exile; others underwent “rehabilitation” to make them fit to live in a Communist state. To this were added economic hardships and even starvation. Since then, however, life has been transformed. The decision to abandon the centrally planned economy in favor of a “socialist market economy” was a bold step, as was the decision to throw open the doors and invite the world to invest in the new Vietnam.
Visitors today will find a confident, independent people, nursing few if any grudges about the war. They are open and friendly, with a sense of humor and irony, and frankly curious about the outside world. Kind and generally helpful toward strangers, they are industrious, shrewd, and determined to improve their lot.
Culture Smart! Vietnam outlines the history, culture, traditions, sensibilities, and modern way of life of the Vietnamese. It explains certain deep-seated attitudes, describes some of the social and cultural changes now under way, and gives practical advice on what to expect and how to behave in unfamiliar situations. It aims to help you discover for yourself the warmth and vast potential of this fascinating country and its delightful people.
GEOFFREY MURRAY is a journalist, author, and teacher who has worked in Asia for more than forty years. He has published fifteen books on a wide range of business and socioeconomic issues. He has closely followed developments in Vietnam ever since he served as a news agency war correspondent with the Australian army in the mid-1960s, winning the Australian government’s “Vietnam Logistic and Support Medal.” He is officially listed as a Vietnam War veteran by the Australian government.