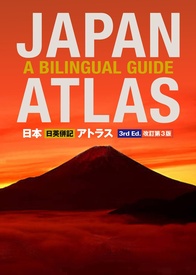 This title features: 21 large-scale maps of the regions of Japan, whichnclude all the officially registered cities, towns and villages.

The only atlas of its kind to feature place-names in both English and Japanese, Kodansha's perennial favorite has been newly revised to reflect the many changes that have resulted from the government's policy of consolidating Japanese cities, towns and villages. The volume includes:
-- 21 large-scale maps of the regions of Japan, including Greater Tokyo and the Kanto area, the Greater Osaka area, and almost all of the officially registered Japanese municipalities;
-- 10 maps of the major metropolitan areas, from Naha in Okinawa to Hiroshima, Kyoto, Nagoya, Tsukuba, Sapporo and many others;
-- 7 maps featuring notable tourist and resort areas, including Fuji-Hakone, Nara, Kamakura, Nikko, etc.;
-- 9 transportation maps, including road and intercity railway maps, Tokyo and Osaka subway and rail maps, and major domestic airline routes;
-- 12 thematic maps indicating national parks, historic spots, ceramic kiln areas and more.